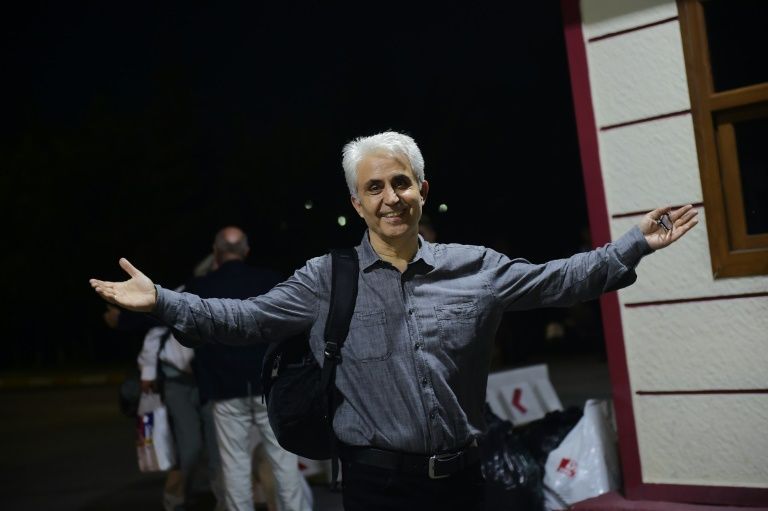 Following a judge’s order, Turkish cartoonist Musa Kart is out of prison after nine months along with six colleagues from Cumhuriyet newspaper. Four more are still detained, however, and all of the defendants still face charges that could result in prison sentences. Cumhuriyet is the only major independent newspaper remaining in Turkey, and the case is seen as virtually the last stand for free press in that country.

A total of 17 Cumhuriyet staff members–including three previously released from detention on medical grounds–are charged with “aiding and abetting” terrorist organizations, an accusation that President Recep Tayyip Erdoğan has leveled against independent journalists with abandon. About 150 journalists are currently jailed in Turkey, and 173 media outlets have been shut down or taken over by the government in the year since a failed military coup. Erdoğan has cited national security concerns as cover for a purge of media, universities and the military and judiciary, ousting people claimed to be supporters of exiled cleric Fethullah Gülen.

Following a week of testimony from Cumhuriyet defendants including Kart, an Istanbul judge ordered the seven released on probation until the trial is concluded. Still in custody due to “the gravity of the charges they face” are the chairman of Cumhuriyet‘s executive committee Akin Atalay, its chief editor Murat Sabuncu, and reporters Kadri Gursel and Ahmet Sik. Kart could face up to 29 years in prison if convicted on the charges against him, while other defendants could get up to 43.

Kart and the other freed prisoners emerged from jail early on Saturday morning to cheers from supporters. The cartoonist said that “during this period in jail we have felt no hatred, no rancour, we could not live with such thoughts.” But he added that their elation at being released was tempered by the fact that four more colleagues are still detained. “The image of journalists in jail is not flattering for our country and I hope our four friends will come out as soon as possible,” he said.