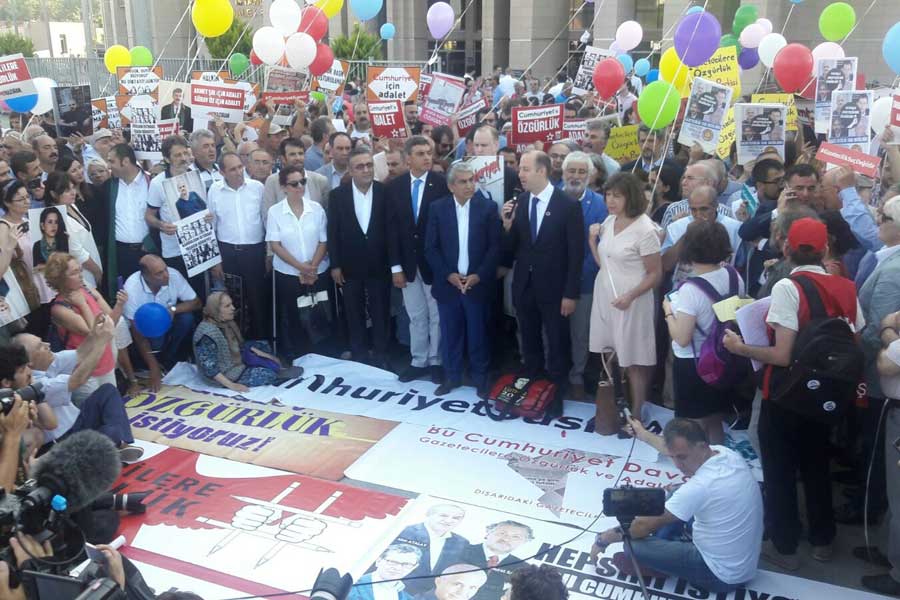 After nine months of pre-trial detention, Turkish cartoonist Musa Kart and his colleagues from Cumhuriyet newspaper finally appeared in an Istanbul court today for hearings expected to last all week. The case is seen as virtually the last stand for free press in Turkey, and demonstrators massed outside the courthouse with balloons and posters in support of the journalists.

After their initial arrest in November 2016, Kart and his colleagues were held for five months before they were finally charged with supporting Kurdish militants and the Gulenist movement in April. The charges specifically against Kart are “helping an armed terrorist organization while not being a member” and “abusing trust.” Organizations that advocate for press freedom, including the International Press Institute and the Committee to Protect Journalists, say that the charges are baseless and simply provide cover for President Recep Tayyip Erdoğan to silence accurate coverage of his regime.

Since Turkey’s failed coup last July, a total of 50,000 people, including 150 journalists, have been arrested on suspicion of plotting against the government. Additionally, 173 media outlets have been shut down or taken over by the state. Erdoğan has recently claimed that only two unidentified journalists are actually in jail for journalism, while “the rest are either terrorists, or they were carrying guns, or they robbed ATM machines.”

Cumhuriyet’s former editor in chief Can Dundar, who was sentenced to jail last year but escaped to Germany, dismissed that claim as ludicrous and said that Erdoğan “regards every criticism as an insult to himself or as a terrorist act.” Observers in Turkey suspect that the government intends to seize the venerable Cumhuriyet, a secular publication founded in 1924, and place it under a board of trustees that will ensure its reporting and editorial coverage parrot official positions.