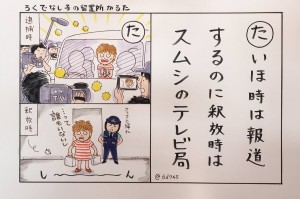 “Good for nothing girl” Rokudenashiko has turned her art to a new cause: fighting Japan’s controversial anti-terrorism law.

Rokudensahiko, or Megumi Igarashi, has long worked to fight gender inequality and to destigmatize the depiction of female genitalia in Japanese artwork. Her “vagina art” resulted in obscenity charges against the artist after she distributed 3D plans for her own genitalia as a reward for a crowdfunding campaign to make a vagina kayak. Igarashi described the ridiculous investigation into her alleged crime in a manga entitled What Is Obscenity.

Despite fines and a short stay in jail, Igarashi continues to address social issues with her artwork, most recently taking on Japan’s new anti-terrorism law. The law ostensibly punishes individuals for plotting terrorism, but it includes some rather odd minor offenses, such as copying music, using forged stamps, picking mushrooms in conservation areas, and competing in a motor boat race without a license.

Igarashi responded to the overly broad anti-terrorism law by publishing manga-style game cards through her Twitter account. She plans to release 50 cards in total, one for each syllable in the Japanese alphabet. The cards each address a particular hardship of the Japanese jail system, which Igarashi herself experienced during her prosecution for obscenity.

From a lack pf personal hygiene items, to sleep deprivation, to skewed media coverage, Igarashi is using her artwork to address her concerns that innocent people will be subjected to Japan’s notoriously harsh (and at a 99% conviction rate, incredibly effective) justice system. Igarashi tells Ilaria Maria Sala with Quartz, “People in Japan don’t want to read books or even manga about the criminal justice system,” but she hopes that people will view her game cards and learn “what it means for the government to be able to one day show up at your door and arrest you, like they did to me.”