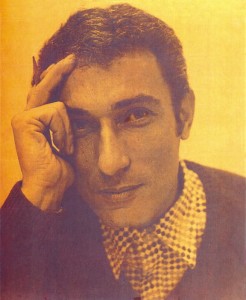 Thirty years ago, Palestinian political cartoonist Naji al-Ali was gunned down on a London street as he walked to work. With his assassination still unsolved, police this week renewed an appeal for leads in the case, hoping that “people who were not willing to speak at the time of the murder may now be prepared to come forward with crucial information.”

At the time of his death, Ali was one of the best-known cartoonists working in Arabic and remains broadly influential today. Having fled Palestine at 10 years old with his family during the 1948 Arab-Israeli War, then spending much of the following decade in Lebanese refugee camps, he was sharply critical of both Israel and neighboring Arab states for their handling of the Palestinian crisis. According to Middle East comics expert Jonathan Guyer, this willingness to take on all sides accounts for Ali’s broad appeal:

He’s the only cartoonist whose work I’ve seen in Muslim Brotherhood newspapers and also in a famous communist bar in Beirut. He has this incredible crossover appeal because he was really an independent thinker and a staunch critic of all authority. Whoever you are, there is something in Naji al-Ali’s work for you.

By the same token, of course, the list of people and entities that might have wanted Ali’s fearless voice silenced is also long and diverse. According to the bulletin posted by London’s Metropolitan Police this week, the cartoonist “had received a number of death threats in the years leading up to his murder.”

As Ali was going to work at the London bureau of Kuwaiti newspaper Al-Qabas on July 22, 1987, he was shot once in the back of the neck by a man that witnesses described as “being of Middle-Eastern appearance and aged about 25, with collar-length thick black hair that was wavy at the back.” Police think that the shooter may have passed off the murder weapon, a 7.62 Tokarev pistol, to a middle-aged man who then left the area in a silver Mercedes. The gun was found in an open field on a housing estate two years later.

Ali was in a coma for over a month after the shooting and died on August 29, 1987. In the Metropolitan Police bulletin, his son Osama al-Ali pleaded for anyone who may have information about the murder to come forward:

Lots of questions are unanswered and we would like to have that closure, so we are encouraged by the fact that the investigation is being reopened and we have some path towards resolution, so we know what happened.

If anybody has any information they should come forth and reach out through the correct channels. Don’t make an assumption as to whether or not you think information is important. Let the professionals be the best judge of how important that information is.

The police bulletin includes detailed descriptions of the two suspects and the vehicle, as well as an updated artist’s rendering of the assassin from witness accounts.

Many of Ali’s cartoons can be viewed here. Almost all feature his signature persona Handala, the eternal 10-year-old refugee.