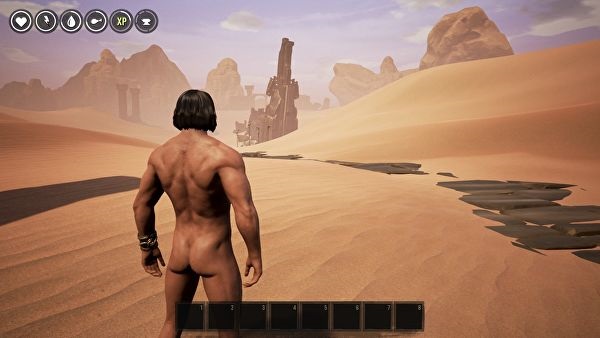 When the Norwegian-made multiplayer open-world survival game Conan Exiles makes its Xbox debut this week, players in North America will notice one major difference from the much-talked-about version already available worldwide on Steam: all prehistoric barbarians will be properly clothed, please. While European Xbox players can still opt to begin the game naked, developer Funcom removed that possibility stateside in order to secure a rating of M on the ESRB scale.

Funcom’s Jens Erik explained in a YouTube video last week that if they had allowed U.S. barbarians to rampage in the buff, the game would certainly have garnered a rating of AO for “adults only.” Although it nominally has the same age rating of 18+ on the European PEGI scale, only 27 titles have ever received the rating of AO in the U.S. and it is considered a kiss of death for developers seeking mainstream distribution. Major retailers including Target, WalMart, GameStop and Best Buy do not stock AO-rated games, nor do console manufacturers license them for release on their platforms in the first place.

To confound matters further, U.S. gamers can still play the full monty version of Conan Exiles as long as they get it from Steam, which does not require games hosted on its site to be submitted for rating by ESRB or any other entity.

The Conan Exiles quandary is an interesting mirror image of the situation for Danganronpa V3 in South Korea, where the government censorship board recently denied any rating at all for the game that involves teens killing each other in a Hunger Games-style elimination match. Although that game and the earlier releases in the series easily garnered M ratings in the U.S., simple nudity–not even explicit sexual activity–in Conan Exiles would have been enough to land it in the same unmarketable boat here.