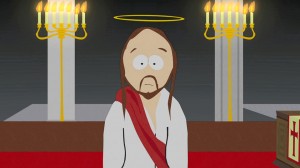 A man in Sochi, Russia was convicted last week of “offending religious believers’ feelings” by sharing several satirical cartoons of Jesus Christ on social media in 2014. Although he has since deleted the cartoons, Viktor Nochevnov was prosecuted under a 2013 law on “insulting religious sensitivities” and fined 50,000 rubles or about $830.

According to Radio Free Europe, the 32-year-old Novchevnov and his lawyer Aleksander Popkov plan to appeal the verdict. Popkov released a statement saying that “Sochi authorities have recently donned the costumes of inquisitors and are leading a quiet battle for religious sterility.”

Novchevnov was not the creator of the since-deleted cartoons, but simply reposted them over the course of a year on Russian social media site Vkontakte. According to the verdict, one showed “a crucified Jesus being carried on the cross with the caption ‘Let’s go!’ — an apparent reference to the phrase Soviet cosmonaut Yury Gagarin uttered as he took off to become the first human in orbit in 1961.”

Another cartoon showed Jesus working out at the gym, while yet another had him “dressed in a Nazi SS uniform with a caption playing on a traditional phrase spoken by Russian Orthodox believers on Easter.”

Earlier this year, the same law was used to convict a blogger who received a 3 ½-year suspended sentence for several religiously irreverent online videos, including one of him playing Pokemon Go in an Orthodox cathedral. The law was at least partly in response to Pussy Riot’s 2012 “punk prayer” inside Moscow’s Christ the Savior Cathedral, which netted two members of the feminist rock group/protest collective almost two years in prison for “hooliganism motivated by religious hatred.”