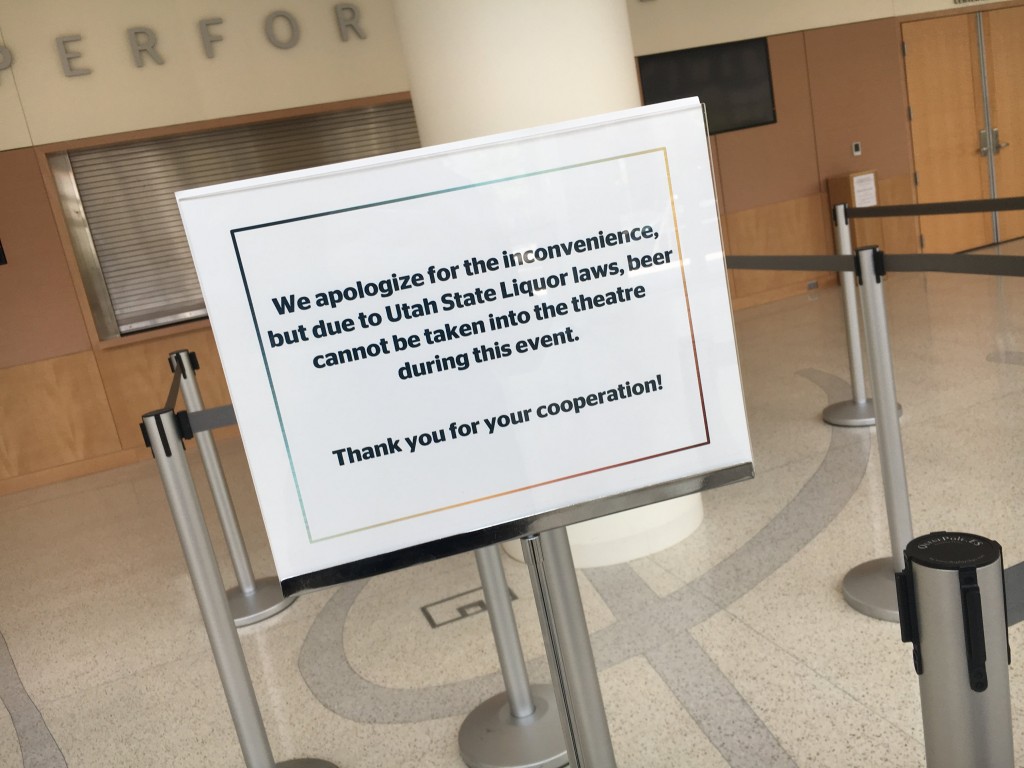 Utah’s speech-chilling liquor law strikes again, this time preventing Salt Lake City theatergoers from enjoying a cold beer during performances of the Broadway hit Book of Mormon. The Eccles Theater, currently hosting the show for a three-week run, normally allows spectators to take their low-alcohol beer from the concession stand into the performance hall but had to curtail the practice in this case due to a sexually suggestive scene in the musical.

Utah law bars alcohol from any performance involving “the exhibition of simulated sex acts”and the state’s Department of Alcoholic Beverage Control is wont to apply the prohibition quite liberally, as Salt Lake City movie theater Brewvies learned last year when it was threatened with a fine and revocation of its liquor license for serving alcohol during screenings of Deadpool. Brewvies sued the state, alleging infringement on its First Amendment rights, but the case is currently tied up in court.

Last year in neighboring Idaho, authorities decided to no longer apply a similar law to “performances expressing matters of serious literary, artistic, scientific or political value” after the state ACLU chapter and the Garden City Visual Arts Center sued over the suspension of the VAC’s liquor license because alcohol was served during a performance by burlesque artist Anne McDonald. That law technically encompassed partial nudity, not just simulated sex acts as in Utah, but was partially repealed by the state legislature this year in accordance with the lawsuit settlement.

Book of Mormon attendees are able to drink alcohol in the lobby or the Encore Bistro located in the theater building, but are not to darken the doors of the performance hall itself with beer in hand. As local news channel Fox 13 notes, the fact that alcohol is allowed in the theater at all is somewhat remarkable, given that before the venue opened just last year it had to be modified with a ‘Zion ceiling’ to shield the eyes of balcony-sitters from the sight of drinks being mixed and poured in the bistro on the other side of a glass partition below. The law that imposed that requirement on new restaurants was also repealed during the 2017 legislative session.