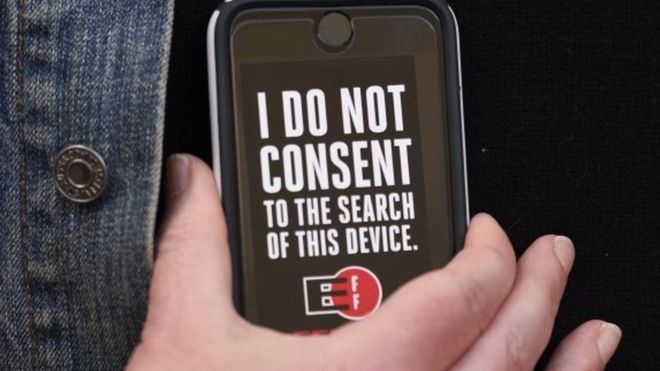 In response to a skyrocketing rate of warrantless searches of travelers’ smartphones and other electronic devices at U.S. border crossings, the American Civil Liberties Union and the Electronic Frontier Foundation this week filed a lawsuit challenging the practice as unconstitutional. The plaintiffs are 10 U.S. citizens and one green card holder who have been subjected to device searches.

Under policies drawn up in 2009, both Customs and Border Protection (CBP) and Immigration and Customs Enforcement (ICE) assert broad powers to conduct warrantless device searches at the border, as detailed here in a blog post by ACLU:

[The agencies] can probe the contents of your smartphone for hours while you wait. They also have the option of downloading and saving all of the data on your phone for later review. They can even confiscate your phone for a thorough ‘forensic’ search at another location, only to return it to you weeks or months later, as happened to our client Matt Wright. One of our clients, Suhaib Allababidi, still hasn’t received his smartphone from CBP after seven months.

The plaintiffs represent a cross-section of the populace, including a journalist, an artist, a NASA engineer, a professor and retired Air Force officer, and a limousine driver. Several of them are Muslim and/or of Middle Eastern or South Asian descent, representing the disproportionate targeting of those groups for intrusive device searches. If CBP and ICE were required to obtain warrants just like law enforcement agencies that do not happen to be located at the border, the judicial oversight and transparency would help to curtail rampant profiling of those travelers.

The lawsuit alleges that warrantless device searches violate plaintiffs’ Fourth Amendment protection from unreasonable search and seizure, and their First Amendment right to free speech due to the chilling effect involved. Just a few years ago in 2014, the Supreme Court ruled that non-border police must obtain a warrant in order to search an arrestee’s phone, but that protection has not yet been extended to the millions of regular travelers entering and leaving the country every day.

ACLU has much more information on the lawsuit in its blog post and press release, which includes links to each plaintiff’s individual border search story. Below, check out some of our past coverage of device searches both at the border and elsewhere inside the country:

Additionally, if you have plans to cross a border with potentially sensitive comic art on your device or in your luggage, bookmark our travel advisory on crossing international borders now!