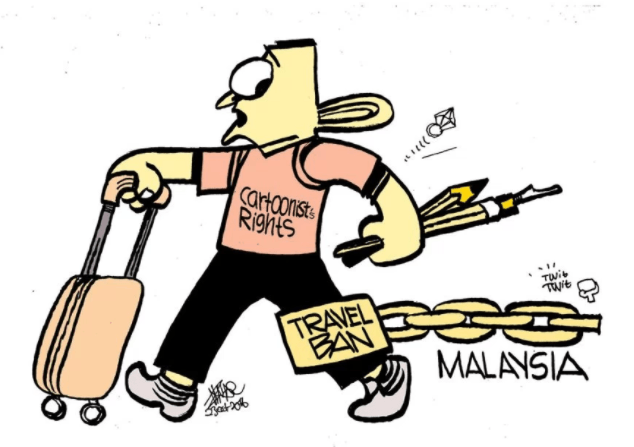 Malaysian cartoonist Zunar will have to wait at least another month for his day in court to challenge the personal travel ban that has prevented him from leaving the country since last year. A judge deferred the hearing to November 16 because Zunar’s lead attorney was not available on the original date last Friday.

Zunar was unexpectedly barred from leaving Malaysia last year because he is charged with nine counts of sedition due to statements he made on Twitter in February 2015. From that time until October 2016 he frequently traveled abroad for speaking engagements and cartoon exhibitions, but never gave any indication that he would permanently leave the country in order to escape trial. In fact, he told Vice News that “I want to expose this for my country, not for me alone, and the government will get an official trial. This is my responsibility.”

Nevertheless, Inspector-General of Police Khalid Abu Bakar personally ordered last summer that Zunar be prevented from traveling overseas as long as the sedition charges are pending. The cartoonist’s trial on those nine charges has been delayed multiple times since it was first scheduled in 2015. If convicted on all counts, he could receive a sentence of up to 43 years in prison. The trial is currently set to begin on November 1.

Zunar was charged with one count of sedition per tweet that he sent in February 2015 following the sentencing of opposition leader Anwar Ibrahim on a trumped-up sodomy charge. The cartoonist hinted that the judiciary in that trial had been subject to political pressure or bribery, observing that “the lackeys in black robes are proud of their sentences. The reward from political masters must be plenty.” He then exchanged Twitter barbs — and a cartoon — with Abu Bakar as officers were en route to arrest him.

Zunar’s new lead attorney Gopal Sri Ram is a retired Federal Court judge who also served as lead counsel in Anwar’s unsuccessful appeal of the sodomy conviction. More recently, Sri Ram has spoken out on behalf of other dissidents who have been subjected to travel bans like Zunar. When he was still a judge in 2009, Sri Ram himself issued a landmark ruling that the guarantee of “personal liberty” in Malaysia’s constitution includes the right to travel abroad.