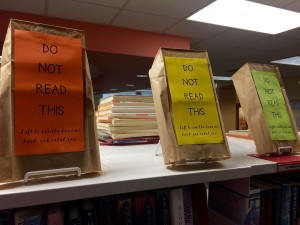 Displays at libraries in Texas and Maryland have caused furor in their respective communities.

In June, the Temple Public Library in Temple, Texas, spotlighted Pride Month with two displays: a rainbow decorated bulletin board that was displayed throughout the month and a table with informational sheets and books on LGBTQIA themes that was set up for a week. The library received a few comments on both displays in June, but the issue began to gain steam in early August when a group called Concerned Christian Citizens posted critical comments on Facebook.

The library board held one of their quarterly meetings this week, and nearly two dozen people from the community attended to comment on the display. One of them was former state rep Molly White, who equated the display with the destruction of the family unit:

“Never, in my wildest dreams, did I ever imagine that my grandchildren would be exposed to materials that are not only contrary to personal growth, but leads people down a path of dysfunction and self destruction.”

Another resident argued that the library itself has no First Amendment rights, only people have those rights, and that the display contributed to “deviant or degenerate activities.” One resident rolled out the argument that the library was engaging in political speech and should give equal space to opposing views.

Fortunately, some commenters defended the library . A local resident, Linell Mikeska, pointed out that the censorship of LGBTQIA material is a slippery slope:

“I bet if we all got up and took a walk through the library and randomly picked up books, there might be things in those books that some of us may find disagreeable. We may not even think they belong in the library. So where does it stop?”

The board didn’t take any action in response to the comments during the meeting, but they have indicated that the library will be drafting a written policy on the selection and approval of display materials.

The Lexington Park library in St. Mary’s County, Maryland, has found itself in hot water over a Banned Books Week display. While Banned Books Week was the last week of September, the library had kept the display up through this week (full disclosure: CBLDF is a sponsor of Banned Books Week). The display featured books wrapped in brown paper bags with labels that read “Do Not Read This. Lift to see the banned book, you rebel, you.”

One parent in the community declared that library staff had “malicious intent” when she discovered that one of the books under the wrapper was The Little Black Book for Girlz: A Book on Healthy Sexuality, an acclaimed and doctor-recommended book on sexuality for teens age 14 and up. The library also recently hosted a voluntary sex education class for teens. The parent, Christina Timmons. claimed that the library was victimizing young patrons during a public forum:

“Commissioners, I’m alerting you our library is preying on kids,” she said. “The library selected their victims — children in a poor section of town. The library started grooming kids by introducing a sex ed class taught by a pervert, who promotes kinky sex and pole dancing. Yeah, this is just what kids need,” Timmons said.

“The libraries, like the predators, they work to gain the trust of our children,” Timmons said. “Children have been taught to trust librarians like they trust police. However, the library has taken that trust and used it for perversion,” she said.

Timmons also attacked the inclusion of LGBTQIA material in the book.

Members of the community defended the material and Jim Hanley, vice president of the library board of trustees, seemingly stood behind the expertise of library staff:

“Look at all the things the library has accomplished. Be sensitive to sometimes the element of exaggeration and distortion as to what occurs within the library walls. These are competent, capable people running our libraries. To be accused of an agenda that is detrimental to the community I think is very unfair and unreasonable,” he said.

At least one country commissioner, however, countered that the library staff didn’t “exhibit good common sense and judgment” in selecting titles for the display. Fortunately, the county commissioners don’t have direct oversight over the libraries in the community.

Hopefully, the administrators of both libraries will ultimately remember that they are obligated to the serve the needs of all members of the community, and they will continue to stand behind their staffs and the right to read.