CBLDF is ready to take on the Big Apple during New York Comic Con with an exclusive variant cover from Dynamite, panels, and signed premiums at booth #2258! 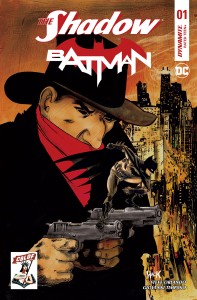 CBLDF has teamed up with Dynamite Entertainment for an exclusive variant of The Shadow / Batman #1 by Steve Orlando and Giovanni Timpano. Robert Hack (cover artist, Chilling Adventures of Sabrina) is the artist for this very rare variant of the the new miniseries featuring the World’s Greatest Mystery and the World’s Greatest Detective! Get your copy at CBLDF booth #2258 before they run out!

Get a global look at comics censorship from CBLDF! See how the new political climate is affecting free speech in the U.S., with increased scrutiny at the border and an abundance of local challenges to comics addressing diversity and equality. Explore how cartoonists are being prosecuted, threatened, and intimidated by authorities around the globe for making art. Moderated by CBLDF Executive Director Charles Brownstein.

Be a #comicdefender at New York Comic Con, October 5 – 8 at the Javits Center! Visit CBLDF booth #2258 for signed premiums, prints, apparel, and more in support of our fight for the right to read, make, and sell comics!