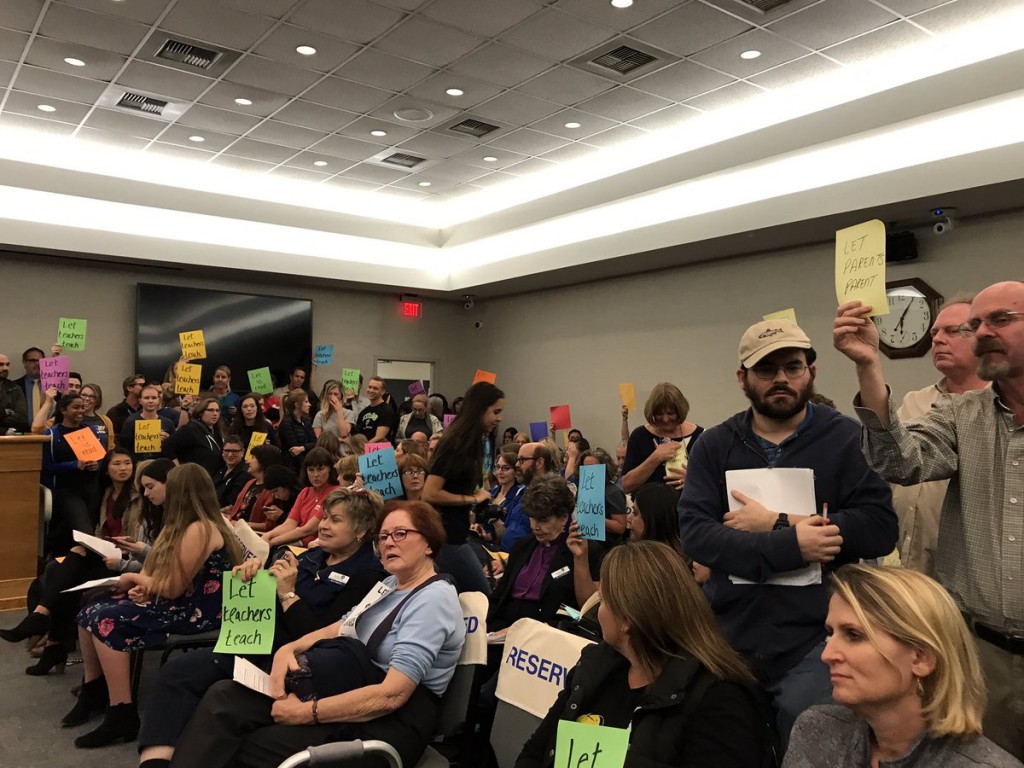 A packed house for Tuesday’s meeting. Photo by @ReporterDawn on Twitter.

In front of an overflow crowd at the Tuesday evening meeting of California’s Conejo Valley school board, president Mike Dunn insisted that the board will vote next week on a proposed ‘red-flagging’ policy for reading assignments, which would require teachers to warn parents about any assigned book considered to have “mature content.”

Conejo Valley first came to the attention of intellectual freedom advocates this past summer, when Dunn refused to even schedule a vote on routine approval of Sherman Alexie’s The Absolutely True Diary of a Part-Time Indian for use in the curriculum during the current school year. The board finally did hold that vote in August with Dunn casting the lone vote against the book, but by then it was too late for teachers to include it in lesson plans for the Fall semester.

A new twist in the saga began last month when duelling committees–one made up of teachers, a principal and administrators, and another comprising just two board members–met separately to draw up new policies on alternate reading assignments to be offered when a parent or student objects to the primary text.

Despite the fact that teachers and even other board members have been shut out of the process by Everett, and that dozens of teachers, students, and parents attended this week’s meeting to voice their opposition, Dunn has scheduled a vote on the proposed policy for next week. As with the Absolutely True Diary debacle, the board president is again refusing to even place the teachers’ version of an alternate assignment policy on the agenda.

At this week’s meeting, teachers voiced concern that Everett’s policy which was supposed to be focused on reading assignments for English classes actually encroaches on other areas of the curriculum. “This amendment affects all subjects,” said Thousand Oaks High School science chair Heather Farrell. “This is not an English issue. This is not a core literature issue. This is a curriculum and academic-freedom in-the-classroom issue for all subjects at all grade levels.”

Even though the meeting lasted five hours, ending at about 11:20 p.m., there were still about 40 people who had signed up to speak but didn’t get the chance. An online petition asking the board to withdraw or oppose Everett’s policy has garnered 1679 signatures as of this morning, and the district has received letters of protest from the National Coalition Against Censorship and the National Council of Teachers of English (jointly), as well as ALA’s Office for Intellectual Freedom.

For more on the pitfalls of red-flagging policies, see NCTE’s position statement on the practice which exerts an undeniable chilling effect on curricula.

← Prize Winners on the Work that Inspired Them
Spirit of Giving: Comics’ Greatest Creators Personalize Books For CBLDF Supporters! →