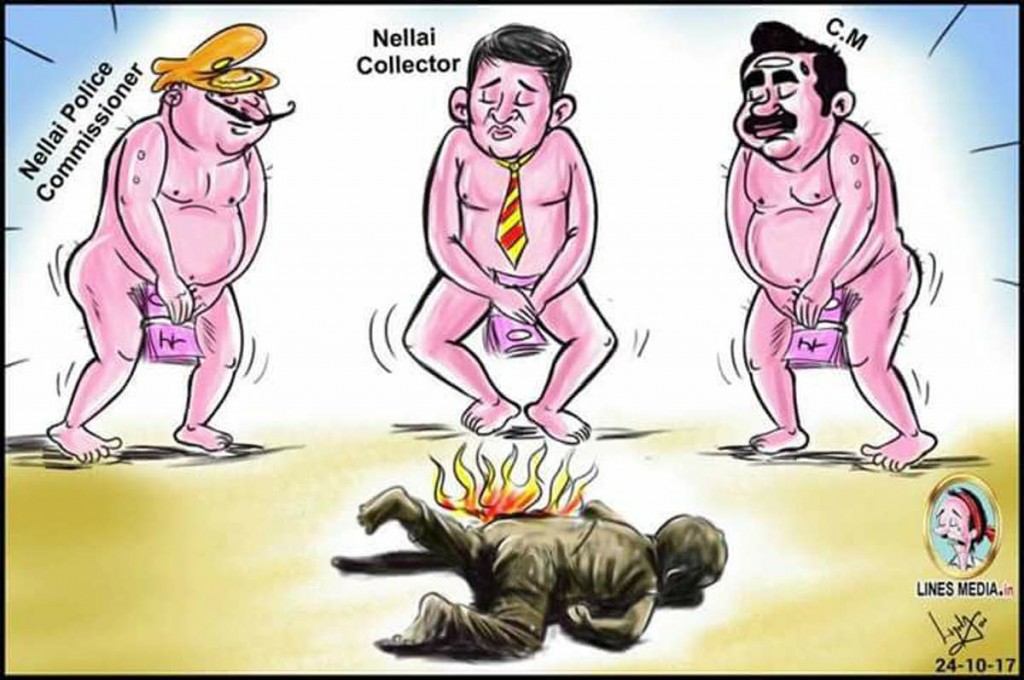 Indian cartoonist Bala G. is vowing to continue his work, despite the fact that he was arrested earlier this month for defamation and obscenity after drawing three local officials in the buff. The cartoon in question was a commentary on the murder-suicide by fire of a family of four outside a municipal office, after their multiple appeals for help fending off overzealous moneylenders went unheard.

The family–two parents and their daughters, ages two and four–died last month in the city of Tirunelveli. They were reportedly being hounded by lenders, despite having already repaid with interest a loan that they took out. The situation only got worse when they asked police for help, as officers who had been paid off by the lenders began to harass the family as well. They then appealed to municipal authorities, but their pleas were ignored until the mass immolation. The woman and her daughters died instantly, but her husband lingered for two days with burns over 100% of his body before dying in a local hospital.

Naturally, the tragic story received widespread media coverage across India and inspired an angry backlash against officials who had failed to help the family. Bala G. expressed that anger in the cartoon above, which shows the local police commissioner, the district collector, and the Chief Minister for the state of Tamil Nadu, all in the nude and shielding themselves with wads of bribe money as a child burns on the ground in front of them.

The cartoonist was arrested November 5 on the basis of a legal complaint filed by the district collector, Sandeep Nanduri. Bala G. was released on bail the following day, but may have to stand trial on a charge of “printing or engraving matter known to be defamatory” with an enhanced penalty for “publishing or transmitting obscene material in electronic form.”

Nevertheless, this week he posted a defiant new cartoon on Facebook along with an extensive explanation of his motivation for the original caricature. Recounting his own child’s fear after he was released from jail, Bala G. said that “it felt as though the kids who were ablaze were holding me tight and crying.” Through the second cartoon and the Facebook post, the cartoonist promised he will “continue to highlight the vices in the society and hold those in power accountable,” even if it results in legal action.