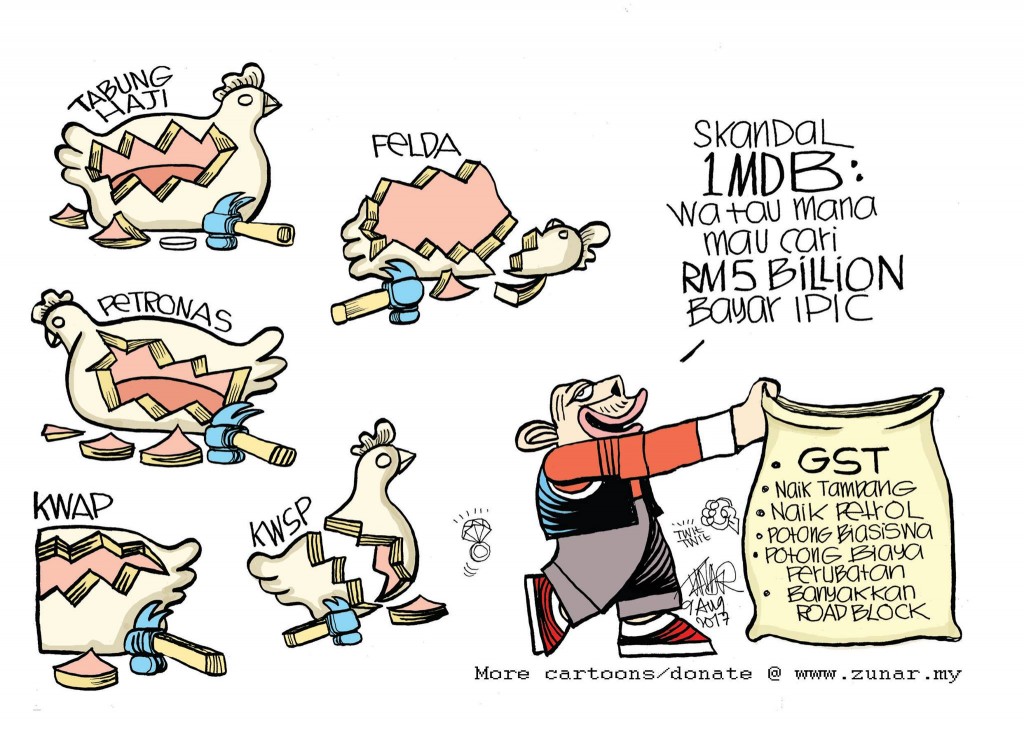 Malaysian cartoonist Zunar, already fighting nine counts of sedition and a personal travel ban that prevents him from leaving the country, was called in for questioning by police today over a cartoon that he posted online in August. Meanwhile, a mid-level court also denied his request to have the constitutionality of his travel ban decided by Malaysia’s top court.

Speaking to the press after the hour-long interrogation today, Zunar said he refused to answer any questions from the police as they demanded details on “how I upload the image on Facebook and about the characters in my cartoon.” They also kept his cellphone for “forensic investigation purposes.”

The cartoon in question shows five chicken-shaped coin banks “labelled with the names of various government-linked companies and funds,” which have been smashed with hammers. In the lower right corner is Prime Minister Najib Razak making off with a sack full of loot, presumably raided from the chicken banks in the same way he is accused of raiding the economic development fund known as 1MDB for his own enrichment.

Also today, a High Court judge in Kuala Lumpur refused Zunar’s request to have his travel ban challenge considered by the country’s highest court–the Federal Court. His lawyer in that case said they will appeal the decision. The personal travel ban was imposed last year by Inspector-General of Police Khalid Abu Bakar until such time as the nine charges of sedition against the cartoonist are resolved.

If convicted on all nine counts of, Zunar could face up to 43 years in prison. The charges stem from statements that he made on Twitter in February 2015 following the sentencing of opposition leader Anwar Ibrahim on a trumped-up sodomy charge. The cartoonist hinted that the judiciary in that trial had been subject to political pressure or bribery, observing that “the lackeys in black robes are proud of their sentences. The reward from political masters must be plenty.” He then exchanged Twitter barbs — and a cartoon — with Abu Bakar as officers were en route to arrest him.