The National Coalition Against Censorship, CBLDF’s frequent partner in the fight for free expression, has named their free speech offenders and defenders for 2017. Let’s take a look at some of the free speech heroes and villains that CBLDF helped support (or fight!) this year…

Congressman William Lacy Clay led the defense of artwork by high school student David Pulphus. Pulphus won the Congressional Art Competition, but several of Congressman Clay’s fellow legislators felt the the artwork, which focused on police brutality, was inappropriate for the halls of the U.S. Capitol. These individuals repeatedly removed the artwork, which Congressman Clay dutifully replaced. Eeventially, the Architect of the Capitol removed the work entirely, and Clay filed a lawsuit alleging that the act violated the First Amendment.

After an attempt to keep Sherman Alexie’s acclaimed The Absolutely True Diary of a Part-Time Indian out of classrooms in the Conejo Valley Unified School District. The book was eventually approved, with school board president Mike Dunn, who had repeatedly delayed voting on approving the book, casting the one vote against it. Subsequently, a small contingent of the board developed a red-flagging policy that requires parental warning about “mature” reading materials, allowing a very small component of the community to determine what is appropriate for all students in the district. 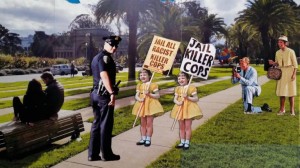 A school district in San Jose, California removed a Black History Month art exhibit from its administrative offices only a few hours after its installation, citing complaints from parents who were offended by artist Mark Harris’ mixed-media collages. Although the East Side Union High School District offices have for many years hosted annual exhibits of “artifacts” from Black history, Superintendent Chris Funk said that Harris’ work exploring civil rights, institutional racism, and police violence is too political to be displayed in the same space.

What does 2018 have in store for us? It remains to be seen, but we expect to be busy defending the right to read! Please include CBLDF in your year-end giving. If you join or renew your membership before the end of the year, you’ll receive an amazing array of awards featuring artwork by Vanesa R. Del Rey! Membership also makes a great last-minute Christmas gift! More details here.

Thank you for your support in 2017! Help support CBLDF’s important First Amendment work in 2018 by visiting the Rewards Zone, making a donation, or becoming a member of CBLDF!