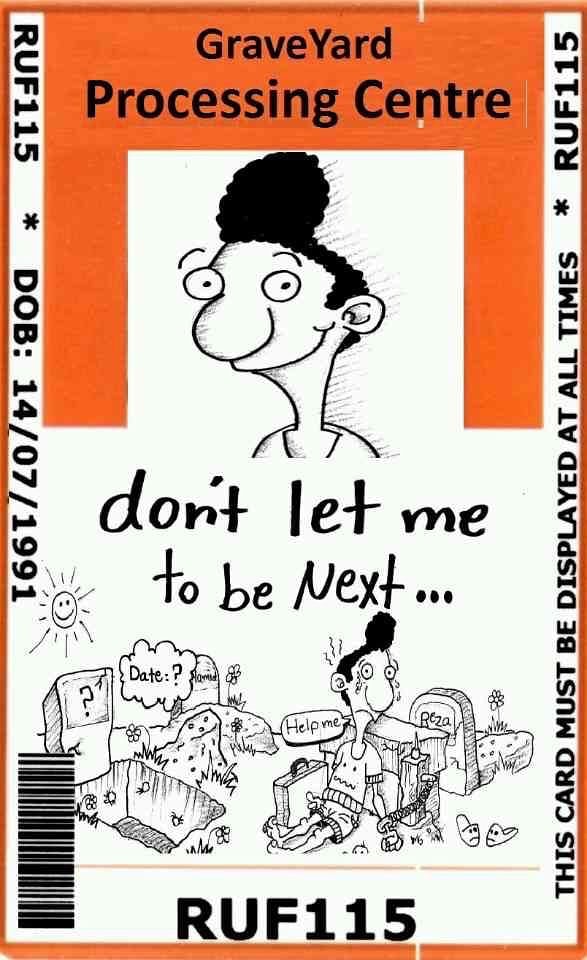 The Iranian refugee cartoonist known as Eaten Fish, who has spent an excruciating four years suffering from mental health issues in Australia’s offshore immigration detention facility on Manus Island, has finally been granted refuge in an unidentified northern European city. The International Cities of Refuge Network (ICORN) arranged a two-year artist’s residency for him there, with the hope that he will receive permanent asylum before that time runs out.

Eaten Fish, whose real name is Ali Dorani, was already dealing with OCD, PTSD, and panic attacks when he reached Australian territory in 2013. Like all asylum seekers arriving by boat he was placed in an offshore detention center in Papua New Guinea, allegedly to await processing of his asylum application. Along with hundreds of other detainees on Manus Island and Nauru, however, he was instead held for years in hellish conditions as described by The Guardian:

Needless to say, that situation in combination with the substandard health care provided in the camps did nothing to improve Eaten Fish’s mental state. Factors including repeated sexual assaults from guards and other prisoners triggered his OCD such that he obsessively washed his clothes and scrubbed his body raw. His panic attacks were often accompanied by extreme pain and a paralytic state.

In late December 2016, Eaten Fish’s application for asylum in Australia was denied because he was not “well enough to disclose to immigration authorities the information expected of him,” according to writer Janet Galbraith, who advocated for him from afar by petitioning her government to bring him to Australia for proper treatment. Other Australians including cartoonist Andrew Marlton (AKA First Dog on the Moon) and Dr. Susan Ditchfield also worked to raise awareness of his case, but detainees are not permitted to have any sort of representation or other help in their actual immigration proceedings.

I have left PNG. It was a long journey but I am safe now. I am thinking about my friends in Manus Island and Port Moresby. Thank you to my supporters and people who worked to make this journey happen.

We are very pleased to hear that Eaten Fish is finally in a place of safety, and hope that he is now receiving the treatment he has needed for a long time. We are also grateful to ICORN and the unidentified country that gave him refuge, particularly in light of the fact that he is banned from the United States under the terms of President Trump’s executive order on immigration.