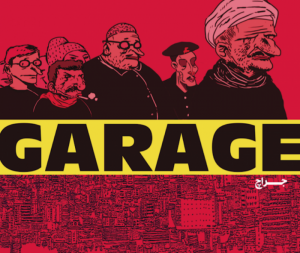 We’ve said it before, but it bears repeating: the international hot spot for vibrant, surreal indie comics, for the past several years at least, is the Middle East and North Africa. Much of the innovation comes from Egypt, where occasionally published comic serials like Toktok and the feminist Shakmagia have flourished since the hope-filled days of the Tahrir Square uprising and the disappointments that came after.

A relative newcomer to the scene is Garage, founded in 2015 by twin brothers Mohamed and Haitham El-seht–known collectively as Twins Cartoon. In a profile and video at Design Indaba, the two discuss the impetus for Egypt’s comics renaissance. “[A]fter the revolution, many people started to make comics, graffiti and photography,” explains Mohamed. “They started to feel like everything is for us, we own the street, we own the comic magazine, we own everything.”

But even though the political revolution has not turned out the way many creatives had hoped, that has not stopped the flow of artistic innovation. To the Twins Cartoon duo, it is vitally important that the artists in their collective should have total creative freedom–not only for their own benefit, but to challenge the Egyptian public to take a new perspective on issues of the day. Although President Abdel Fattah el-Sisi’s government has cracked down on art galleries, cartoonists, novelists, and publishers, Mohamed says the censorship he fears most comes not from the government but from his fellow citizens:

I always have a fear of the people, the public, because many of them are not employed and don’t have an education. So if you make something they don’t like, something out of the box, something they are not used to having, they just come and make censorship by themselves.

Check out the profile of Twins Cartoon here at Design Indaba, then watch this short video about their creative process and some of the creators who work with them.