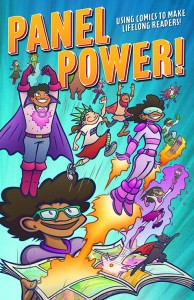 We’re kicking off 2018 with one more look back, this time at CBLDF’s 2017 publications! In 2017, we released four more issues of CBLDF Defender, our news magazine coming from the frontlines of the fight for free speech, a totally revamped edition of our Banned Books Week Handbook, and Panel Power, an all-new publication about using comics to inspire kids to become life-long readers!

Inspire kids to become lifelong readers with Panel Power, a CBLDF resource that provides an introduction to comics and background on why they’re good for kids! A tool for battling misconceptions about the format and filled with information about the benefits of comics, activities, and reading recommendations for engaging kids with comics, Panel Power is an essential resource for retailers, educators, librarians, and parents! Panel Power features all new cover artwork by Matthew Loux (SideScrollers, The Time Museum). Read Panel Power below and at comiXology, or pick up a copy at comic book stores around the country! Bundles are also available in the CBLDF Rewards Zone.

CBLDF Defender is our free quarterly news magazine coming to you from the front lines of the fight for free speech! You can find it at comic book stores across the nation, on comiXology, and right here at CBLDF.org! Each issue of CBLDF Defender will bring engaging creator interviews, detailed analysis of current censorship news, and in-depth features that tell the story of the people fighting for the freedom to read!

In 2017, we were honored to have Scott Snyder, Jason Aaron, Marc Andreyko, Gene Luen Yang, and G. Willow Wilson featured in the pages of CBLDF Defender, with covers from Greg Capullo, Olivier Coipel, Rafael Albuquerque, and Jamie McKelvie!

In the last issue of 2017, we share Batman scribe Scott Snyder’s inspiring keynote address! CBLDF Defender Vol. 2 #4 features an iconic cover of Batman by frequent Snyder collaborator Greg Capullo (Batman, Spawn). In the issue, we look back on our work in 2017 protecting the freedom to read comics and on Boston’s war on Christmas comics!

In the September issue, CBLDF talks with prodigious comics scribe Jason Aaron (Thor, Doctor Strange, Star Wars)! CBLDF Defender Vol. 2 #3 features an iconic cover of Thor by Olivier Coipel (House of M, Legion of Super-Heroes, Thor). In addition to the interview with Jason Aaron, we examine the scrutiny of comics by the TSA, take a look at the attacks on free speech in Turkey, celebrate a librarian who stood up to censorship at the turn of the 20th century, and get ready for Banned Books Week!

CBLDF Defender Vol. 2 #2 features an iconic cover of Batwoman by Rafael Albuquerque (American Vampire, Animal Man). CBLDF talks with Love Is Love architect Marc Andreyko and ambassador for comics Gene Luen Yang, and we celebrate summer reading with banned comics! All this plus the latest attacks on reading, the top challenged books of 2016, and more!

In the first issue of 2017, CBLDF talks with Ms. Marvel writer G. Willow Wilson about censorship, Ms. Marvel’s role as symbol of protest, and more! CBLDF Defender Vol. 2 #1 features an iconic cover of Ms. Marvel by Jamie McKelvie (The Wicked + The Divine). In this issue, we examine the risks of crossing the border under the current administration, look back at ACLU’s defense of comics in the 1950s and celebrate Women’s History Month with the ladies who fought censorship! All this, plus the latest censorship battles!

Discover the books facing censorship. In the totally revamped 2017 edition, creators talk censorship, including Neil Gaiman, Raina Telgemeier, G. Willow Wilson, and more. Features a cover by Jillian Tamaki, the artist of This One Summer, the most challenged book in 2016!