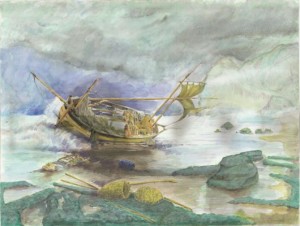 This week could be your last chance to ever see the art exhibit from Guantanamo Bay detainees, it closes Friday, January 26th.

Since the November shift in policy from the U.S. military, art made by inmates is no longer allowed to leave the base. Even if the artist of the piece is released, the art belongs to the military unless this policy shifts back to its previous incarnation.

Last week, the National Coalition Against Censorship was one of 10 signatories on an official letter to the U.S. President and the Secretary of Defense, asking them to reconsider the policy change.

Since the artwork has always been heavily scrutinized by experts in the field for anything that would be damaging to national security, the letter finds that the logical conclusion for the policy change is unapologetic censorship.

the policy change is a flagrant attempt to stifle public discussion that could arise from an encounter with the artistic and human side of Guantanamo detainees. Absent security concerns, this policy also violates the human rights of the detainees under international norms. Further, the directive suppresses documents of clear political and historical importance to the American public.