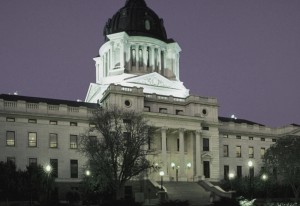 South Dakota Senator Phil Jensen (R) changed his mind about making history with the first bill to ban discussion of gender identity and gender expression in K-7 classrooms throughout the state.

Jensen originally proposed SB 160 because he felt gender was not appropriate for anyone below eighth grade to discuss and those students should instead focus on “reading, writing, and arithmetic.” The bill was the first of its kind regarding trans and gender non-conforming discrimination, but it closely resembled the legislative bigotry of “no-promo-homo” laws that are active in seven states. Research shows that prohibiting educators from talking about the sexual spectrum only increases bullying and harassment of LGBTQIA students.

Jensen assured the AP, “It wasn’t a hoax.” Considering Jensen’s anti-LGBTQIA track record, there was little concern people thought it was a prank. In fact this wasn’t his only anti-trans bill proposed this session. This other bill would require public restrooms to have signs alerting people “that a person of the opposite sex may be in the restroom the user is about to enter.”

Jensen claims he scrapped the education bill because there were aspects of it he hadn’t considered fully, but potentially it was the national media attention his discrimination generated. There is little doubt, given his track record, that this will not be the last we hear from him regarding inhibiting the rights of the trans and gender non-conforming community.

If you are interested in celebrating this failure of legislation, consider reading George by Alex Gino or I am Jazz by Jazz Jennings and Jessica Herthel to a child you love. Great books, like great ideas, are meant to be shared.