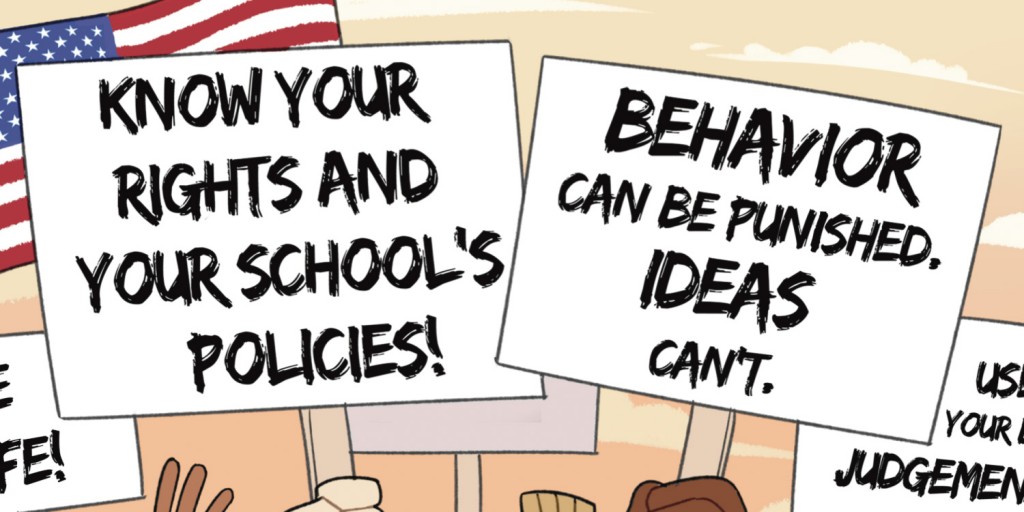 Last week, reporters and social media advocates showed up en masse to help #StudentsBeHeard by spreading the word about CBLDF’s powerful new students’ rights resource created with National Coalition Against Censorship by cartoonist Kai Texel.  From thousands of supportive posts, tweets, and retweets to dozens of thoughtful, generous articles from venues including Teen Vogue, The Washington Post, The Advocate, Mashable, LJ’s Infodocket, Bustle and many more, we were able to reach hundreds of thousands with this important resource. Here are some highlights from the coverage:

Teen Vogue kicked off the week spreading the word about students’ rights in preparation for National School Walkout, a protest planned by students across the country to honor and support the victims and survivors of the February shooting at Marjory Stoneman Douglas High that left 17 people dead and brought rise to new voice in youth activism.

To help clear up any confusion about what is and is not protected when you walk out of class, the Comic Book Legal Defense Fund (CBLDF) and National Coalition Against Censorship (NCAC) teamed up to put together a user-friendly guide to what can and cannot get you into trouble while protesting during the school day. The free comic, by cartoonist Kai Texel, lays out a familiar situation — getting a poster ready for a march — and lets students know how their actions can be interpreted by their academic institutions.

Teen Vogue also published the comic in full to help spread the word far and wide to as many students as possible!

The Washington Post took the time to interview Kai Texel about how her own experiences shaped the comic.

KAI TEXEL vividly recalls the lockdown drills staged at her New Jersey high school. “We’d hide under desks, turn out the lights and lock the doors,” she said. “I remember having surprise ones multiple times a year. It was a part of life.”
Texel, who graduated from High Point Regional High School in Sussex County in 2012, is now a cartoonist, and she used those lockdown memories to help fuel her new webcomic, “Be Heard!,” in which two friends discuss how best to speak out.

They also spoke with educator, creator, and CBLDF supporter Gene Luen Yang about the project –

“Free speech is foundational to our society, but it’s surrounded by a tangle of complexity,” Yang said. “The CBLDF comic aims to guide young people through that tangle.”

The day of National School Walkout,  the nation saw students walk out en masse, “to protest the gun violence epidemic that has plagued American schools for years.” Entertainment Weekly published the comic in full and their support increased the reach of the resource when it was needed most.

“In the U.S., freedom of speech is paramount. The First Amendment states that you can’t be arrested for saying things the government doesn’t like,” Neil Gaiman, co-chair of the CBLDF’s advisory board, said in a statement. “It’s important that students everywhere know that they have the right to be heard. This comic will help provide them with practical tools to raise their voice.”

The Advocate is the only publication dedicated to the LGBTQIA Movement that began before the Stonewall Riots that is still in print today! So their championing of the Be Heard! comic, and its commitment to protest rights was immensely appreciated.

When Texel was asked to create a comic for students about upcoming protests she was beyond thrilled.

“The comic was made with the intention to help them organize and take the precautionary steps to ensure that they are effectively using their voices. I thought the best way to do this was to make it from the perspective of the students themselves,” Texel says.

None other than the queen mother of young adult novels, author Judy Blume — also a member of the NCAC board of directors — said in a statement, “This comic book feels just right. It’s so important to support and encourage kids on issues that affect their own lives and their country.”

Be Heard! was also featured on these amazing sites:

“People often forget that students are citizens with the same First Amendment rights as adults. They often bear the brunt of censorship, both in what they choose to read and in how they choose to speak out.”

This Saturday students and adults will gather in D.C. and around the country at March For Our Lives protests. Hopefully, with all the support Be Heard! has found, it will continue to be a resource on March 24th and long beyond, defending those that are actively shaping the national debate!

CBLDF and NCAC extend our deepest thanks to David Hyde and everyone at Superfan Promotions for helping us spread the word about #StudentsBeHeard! 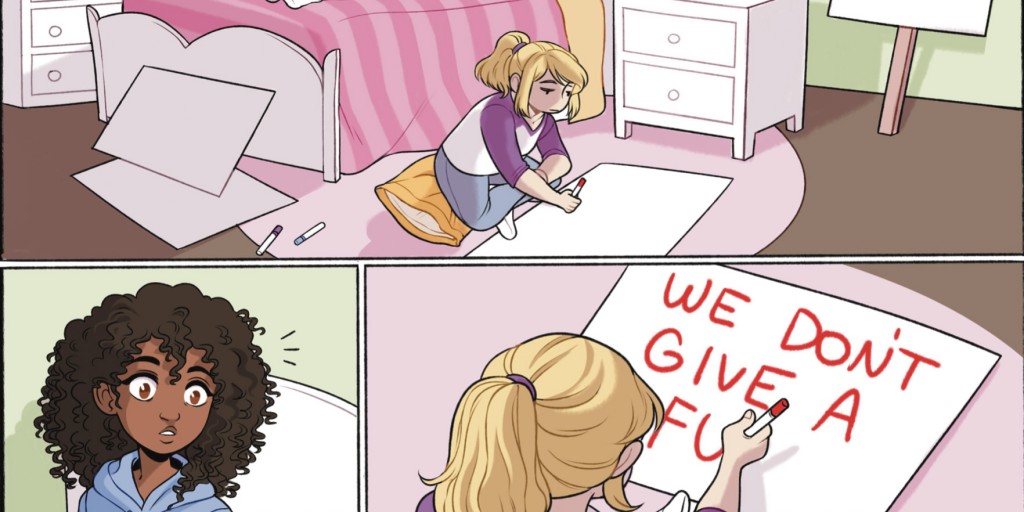