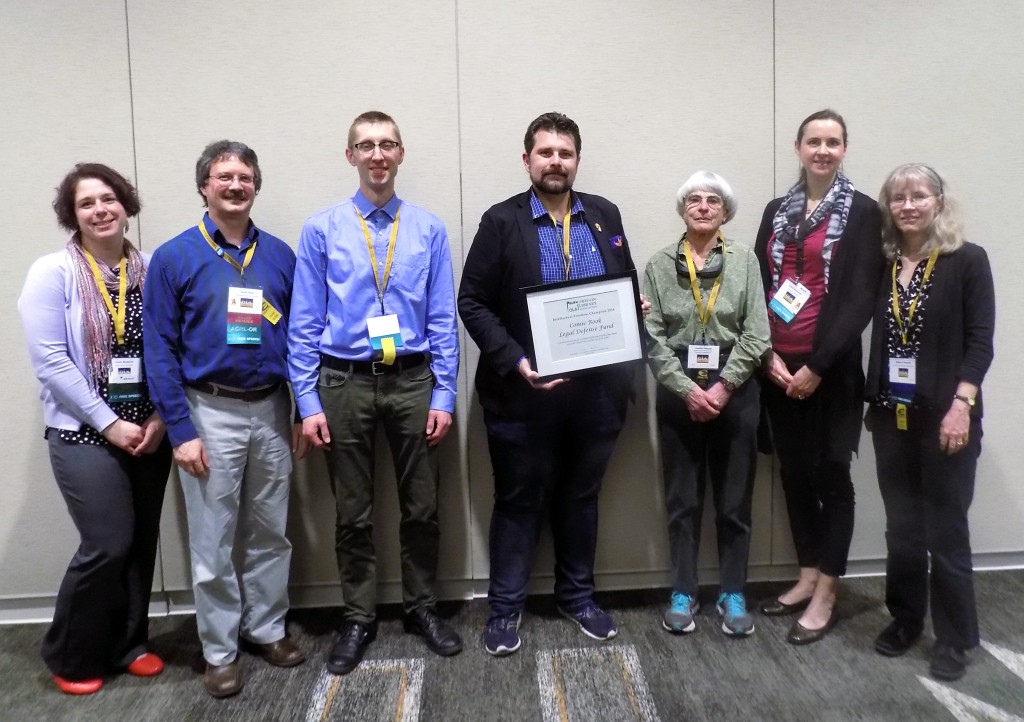 “In the intellectual freedom community, our job is to change the world one mind at a time.” – Charles Brownstein of CBLDF

At the 2018 Oregon Library Association annual conference in Eugene, OR, on April 20, 2018, the Intellectual Freedom Champion Award  was presented to the Comic Book Legal Defense Fund. The award is granted by the Intellectual Freedom Committee of the Oregon Library Association to recognize “truly outstanding effort in promoting the principles of intellectual freedom.” CBLDF’s efforts, including the recent student rights resource Be Heard  and work supporting librarians, were celebrated during the award presentation.

CBLDF Executive Director Charles Brownstein received the award on the organization’s behalf. His remarks addressed current challenges to intellectual freedom and the power libraries hold for healing division within communities. His full remarks below speak to not only the challenges faced by defenders of intellectual freedom but as a call to action to “build true community by providing people with a place where they’re allowed to change their minds.” Read on or listen to the full audio.

Thank you so much for this generous honor. Being here in Eugene and interacting with this great community of Oregon library professionals, I’m filled with pride that the Comic Book Legal Defense Fund is a part of this state’s tremendous culture of intellectual freedom. You don’t need me to tell you that Oregon has a strong heritage of free thinking and free expression. That spirit of activism, inquiry, tolerance, and diversity helped draw the CBLDF to Oregon, and inspires us to do our best to serve this extraordinary community. Thank you for welcoming us so graciously.

At the same time as I’m honored to be here on this Oregon stage, I’m also somehow perversely reminded of a quip from Dr. Fredric Wertham. Writing in the Saturday Review of Literature, he referred to comic books as the “marijuana of the nursery.” This may speak to why Portland is now regarded as “Comics Town, USA.” For those outside the comics field, Dr. Wertham was the acclaimed neuroscientist turned quack who championed the anti-comics crusade in the 1950s. Thanks in large part to his efforts, comics were branded with an extraordinary stigma that persisted for decades. At best, the medium was regarded as low-value speech, and at worst a gateway to anti-social behavior. For many folks like me with a bit of salt and pepper in their hair, comics were a kind of contraband, a forbidden flower that was said to impair real learning.

Thankfully, we’ve now rethought our relationship with many of the taboo topics of the 20th Century. We’d laugh Doc Wertham’s assertion that comics like Batman and Robin cause kids to be gay right out of the room. We’d dismiss the notion that comics are a danger to the normal child, or even that comics are solely part of the currency of childhood without relevance to the adult world. We’d reject that lazy media effects argument suggesting that the comics a kid reads may incite them to risky and delinquent behaviors in the real world.

For the third year, Drama, Raina Telgemeier’s graphic novel for middle-grade readers landed on the ALA’s most frequently banned list because it has a gay character in it. CBLDF spent a great deal of 2016 and 17 defending This One Summer, Mariko and Jillian Tamaki’s outstanding story about adolescence, in part because it depicted older teens drinking, smoking and talking about sex. Which, as those of you who are parents are aware, are subjects of no interest to actual teenagers anywhere. In a Seattle suburb, we spoke up for Mangaman, a coming of age story by Barry Lyga and Colleen Doran that showed kids that it was ok to decide not to have sex. Despite this, a parent told local news media that the book was pornographic for containing pixelated genitals. We can point fingers at these communities outside our state, but we’re not immune here. Last year a local school district sought to ban Rainbow Rowell’s Eleanor and Park, while in 2016 a school librarian was disciplined for providing access to Robie Harris’s young reader friendly sex-ed book It’s Perfectly Normal. Even close to my home in Portland, we saw a book ban in Beaverton recently.

I could bring the entire mood of this room down by further itemizing examples where intellectual freedom has been challenged. By pointing out cases where the judgment and livelihood of professionals like yourselves was called into question because they were working to serve their community. Or, worst of all, where a young person internalized that there was something wrong with them because an older member of the community condemned a book they identify with.

I won’t do that. But I will emphasize that intellectual freedom can’t be taken for granted. No matter how we pride ourselves on our individual or community tolerance, progressiveness, or diversity, there are always going to be subjects that someone wants to silence. Our role, as advocates for intellectual freedom, is to hear those critics with true empathy, while holding firm to the principle that everyone in our community has a right to make their own decisions about their intellectual development and that of their children.

I strongly believe that one of the reasons we face the cultural and political mess we’re in is because our society has become increasingly tribal in its outlook. We’ve ceased to behave as a body politic that’s still in it together despite our differences. Instead, we treat those differences as mortal divisions. We increasingly live in a culture of recrimination, where we segregate ourselves according to hashtag affinities. When we disagree with our neighbor, we don’t address them eye to eye with a respect for their basic dignity. We pummel them with scorn, 280 characters at a time. We unfollow them. We urge others to shun them, lest they themselves be shunned. Generally speaking, we cut them off as the other. Conflict moves from zero to nuclear before we’ve had a chance to draw a second breath.

Sadly, this doesn’t just happen online. So often when you see a challenge to a book, it is accompanied by a campaign to destroy the person who ordered it. Considering this climate, it’s hard to blame the intellectual freedom professionals among us who may choose to take the path of quiet censorship instead of the painful path of preserving access to information for everyone in their community. Nonetheless, this is the path we must choose, not only for ourselves, not only for our profession, not only for our patrons but for the betterment of our culture as a whole.

We have serious problems in our culture that often are litigated in the small exchanges of everyday life. When a patron challenges Raina Telgemeier or John Green, is it the content of the book that they’re addressing or is it a concern about their kid coming of age? Do challenges to Toni Morrison and Harper Lee reflect a discomfort with the text or a discomfort with the world? My experience shows me that it’s almost always the latter. My experience also shows that it’s not a winning strategy to call these people out as censors, but to welcome them in for dialogue. People want to be heard, people want to be seen. Every person, regardless of the hashtag they identify with, deserves respect, deserves empathy, deserves compassion. Sometimes they aren’t reasonable and the challenge will continue. But often, truly hearing someone out and expressing that the freedom to make one’s own decisions is a fundamental right not limited to them, but a right that they should respect for their neighbors, that can make a difference that doesn’t just save a book, it can change a life.

It’s a tall order to advocate for empathy in the face of anger, tolerance in the wake of hostility, and respect in the midst of attack. And yet, these are the qualities we most need to move America away from this culture of recrimination and towards a culture of true reconciliation. We’re all in this together. Sometimes standing up for some kid’s right to read a comic book is what it takes to prove that point.

In the intellectual freedom community, our job is to change the world one mind at a time. We provide our patrons not just with access to information, but with the space to expand their consciousness with every sentence that they read. We can make a difference by respecting everyone’s right to let their mind develop freely, by providing access to a diversity of concepts, cultures and views, and maybe most importantly of all, giving people the space where it’s safe to change their minds.

Thank you for this honor, and for your kind attention.

About Comic Book Legal Defense Fund
Comic Book Legal Defense Fund is a non-profit organization protecting the freedom to read comics! We provide legal aid to readers, creators, librarians, retailers, publishers, and educators who face the threat of censorship. We monitor legislation and challenge laws that would limit the First Amendment. We create resources that promote understanding of comics and the rights our community is guaranteed. Every day we publish news and information about censorship events as they happen. We are partners in the Kids’ Right to Read Project and Banned Books Week. Our expert legal team is available to respond to First Amendment emergencies at a moment’s notice. CBLDF is a lean organization that works hard to protect the First Amendment.
For more information, visit www.cbldf.org. CBLDF Twitter CBLDF Facebook