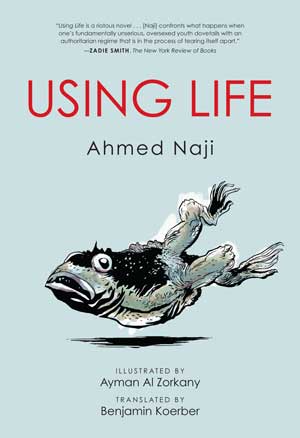 Egyptian novelist Ahmed Naji was fined LE 20,000 following his third trial for “harming public morality” by republishing an excerpt from his experimental book Using Life (also known as Use of Life) in 2014. Naji was initially acquitted of these charges, but the prosecution was able to appeal the decision. Subsequently, Naji was convicted and sentenced to two years in prison, but after 10 months served in jail, his conviction was vacated and this last retrial was ordered.

In an eloquently worded attack on freedom of expression, the prosecution claimed Naji had “published written material loaded with mortal lust and fleeting pleasure, employing his mental faculty and pen in a wicked purpose that violates public morals and good ethics, and in tempting [readers] into debauchery.”

Using Life is an experimental work that incorporates visual elements, including comics drawn by Ayman al-Zorkany. The book’s protagonist, Bassam, is a young man living in a fictionalized Cairo that has been reshaped by a series of natural disasters. An English-language edition is available from University of Texas Press.

Egypt’s constitution, drafted in 2014 following the removal of dictator Hosni Mubarak, includes a clause guaranteeing freedom of expression. Nevertheless, the government under current president Abdel Fattah el-Sisi has increasingly created a hostile environment for free speech. Dozens of journalists have been jailed, a singer was sentenced to six months in prison for a joke about drinking water from the Nile, and the beloved satirist Bassam Youssef cancelled his own show fearing for his safety.

To check out the book that has caused so much moral panic, The University of Texas publishes an edition translated into English.