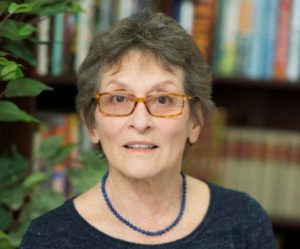 Longtime free speech advocate and previous Executive Director of the National Coalition Against Censorship, Joan E. Bertin, is going to be presented with the Lifetime Achievement Award from The Hugh M. Hefner Foundation for her exemplary history of protecting the First Amendment.

Bertin started her career working in the nonprofit legal sector — initially representing disadvantaged clients in welfare, housing, and employment disputes, and then as an attorney in the national office of the ACLU. After twenty years in nonprofit, she took a four-year break to work in academia, teaching at Columbia and at Sarah Lawrence, she joined the National Coalition Against Censorship.

During her two-decade tenure, the NCAC doubled in size and tackled new fronts of censorship, including the Patriot Act, video game ratings, cyberbullying, suppression of science, and more. Partnered with CBLDF, Kids Right to Read Project was launched under her direction, as well as Youth Free Expression Project and Arts Advocacy Project. The Hefner foundation wanted to award Bertin “for her commitment of decades-long defense of human freedoms of thought, inquiry, and expression in all forms, including the media, arts, video games, and books.”

Bertin said of choosing to return to advocacy in 1997,”I was drawn to NCAC because the First Amendment is such a dynamic and fascinating area of the law, because it intersects with so many critical issues, including civil rights, academic freedom, government accountability, privacy, sexual speech, commercial speech, and much more.”

When Bertin announced in 2017 that she was stepping down as Executive Director, she knew the fight for free expression wasn’t over. “We are in uncertain times, politically, legally and culturally, which pose new demands for free speech advocacy. While I made the decision to step down long before the election and afterwards chose not to rethink it, I’m pleased I can continue to contribute to NCAC’s mission as an advisor and board member. Stepping into a different role will make room to bring new talent to the organization and to the fight to preserve our fundamental freedoms.”

The awards were established in 1979, by Christie Hefner, Chairman of the Hugh M. Hefner First Amendment Awards.”The HMH Awards honor distinguished individuals whose actions support the First Amendment, and year after year we continue to celebrate renowned and unique cases of citizens going above and beyond to utilize this right,” says Christie Hefner. “Continuing to fight to preserve our First Amendment, especially now, is one of the most important and vital contributions we can make.”

The awards will be presented in Washington, D.C. at the Newseum, June 4th, 2018.

About the NCAC
Established in 1974, NCAC is a coalition of more than 50 national organizations dedicated to protecting freedom of speech, thought, and inquiry. It has carved out a unique place among First Amendment advocacy organizations through its defense of literature and art in communities around the country, and through its coalition-building activities and efforts to build support for free expression by appealing to a diverse constituency. For more information on the Executive Director search, please visit ncac.org/executive-director.

← Get Ready for Deadpool 2 With GNs Signed by Joe Kelly, Gerry Duggan, & Many More!
The Comics Code, Race, and the Debut of the Black Panther →