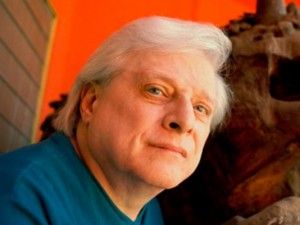 Harlan Ellison, a prolific and award-winning author with a mythic and often divisive personality, passed away peacefully in his sleep on June 28. Ellison authored hundreds of crucial science-fiction stories like I Have No Mouth, and I Must Scream and “Repent, Harlequin!” Said the Ticktockman. He was also far ahead of the rush to writing for TV, crafting teleplays for The Outer Limits, Babylon 5, and Star Trek fan favorite episode “The City on the Edge of Forever.”

Ellison was a vocal supporter of free speech and the Comic Book Legal Defense Fund. In 1990 he was honored by PENInternational for his efforts battling censorship, and then awarded the “Defender of Liberty” Award from CBLDF in 1998. He regularly tested the boundaries of free speech in his own life, making lifelong friends and enemies.

Perhaps one of the funniest Ellison bits on the internet came from a 2009 interview following his own lawsuit to gain merchandizing rights from his Star Trek episode and Alan Moore’s legal attempts to regain control over Watchmen. Tired of dealing with poor business practices, Ellison suggested he was going to start his own nonprofit, Comic Book Legal Offense Fund . Ellison told ComicMix,

“The CBLDF is great as a first-response team after you’ve been hit, but as the saying goes, the best defense is a good offense. An offense with hammers and chainsaws and legbreakers named Vinnie and the best lawyers money can get. I’m tired of playing nice with these sewer dwellers.”

He didn’t stop there, and it is not only a humorous rant indicative of Ellison’s humor, but also an excellent source of mean things to call someone.

Since Ellison’s passing, beautiful, funny, and bizarre stories and memories have been shared across the internet – celebrating the vibrant life of someone who left an impression on all who encountered him, in life or in prose. From the mythic story of him hitting an English professor, getting expelled and then proceeding to send him multiple published stories years later, to the anecdote of a young Ellison running away from home at 13 to join a traveling fair, only to wind up in a cell for three days because he wouldn’t give the cops his name, no single article could contain the entirety of life fully lived.

Whether reading through the plethora of online tributes, or Ellison’s own words in his countless short stories, scripts, critiques, and more – take some time to reflect on the worlds he created and the ways he changed the world we live in. Suffice it to say, Ellison will be greatly missed – as a writer, as an advocate, as a friend and, even to some, as a worthy foe.