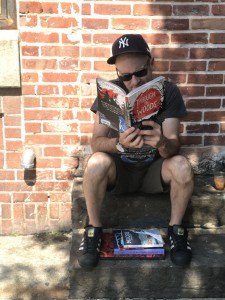 We’ve discussed many times on this blog how all reading is good reading. No one ever says they wish they read less. It reduces stress, increases vocabulary, improves memory, teaches empathy, and best of all – it is contagious. Parents who read to their children a lot, often inspire their children to read for fun. Any excuse to read should be taken, including a fun, made-up holiday at the end of August.

August 28th is not just Jack Kirby’s Birthday, but also has been dubbed Reading Comics in Public Day. The holiday originated in 2010 from the co-creators of The Daily Cross Hatch (currently on extended hiatus), Brian Heater and Sarah Morean. Interest grew each year, with people posting photos of themselves reading new and favorite comics all over the world. In 2012, Wired magazine even covered it, calling the holiday “an opportunity for all comics geeks to come out into the open air and read in solidarity with fellow fans.”

But sadly interest seems to have waned since then. Reading Comics in Public Day does not seem to be getting that much love online in the past few years. And since 2012, the decline in interest seems to coincide with the atmosphere within the comics community changing from one of solidarity, to one of exclusion. This isn’t to point fingers, because that would just be more of the same. This is simply to point out what everybody knows, that comics, much like every other aspect of society is more divided than ever before. People mark their differences from one another, instead of their similarities. And while there are a myriad of differences between people, there is also, at least at the heart of comics, one very obvious thing in common.

Take a picture or send a tweet. Mark this occasion in some way, because even though it is simple and a little silly, it’s a nice reminder of the vast international family of comic book readers. And at a time where isolation and division run rampant, an activity that demonstrates our shared interests feels more important than ever.