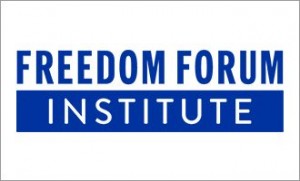 Freedom Forum Institute released the results from their annual State of the First Amendment survey, and 40% of participants could not name even one of the freedoms guaranteed by the First Amendment in the Bill of Rights. Out of the 1,009 respondents 3% could name four of the five freedoms protected, and only person who answered the randomly dialed phone call, could name all five – Freedom of Speech, Freedom of Religion, Freedom of Press, Right of Assembly, and Right to Petition.

Unprompted, 56% of respondents were able to come up with Free Speech as a right protected by the First Amendment. The youngest demographic of respondents (18 – 34) were the most likely to recall Freedom of Religion and Freedom of Press. The most common right to be erroneously associated with the First Amendment, was the Right to Bear Arms – with a whopping 9% thinking it is included in the amendment. If that statistic is true nationwide, it’s upsetting to think how many people are confused about the many of the current national debates.

The survey is conducted annually as a touchstone for attitudes in the country about the First Amendment, and since 1999 has included questions to assess “whether Americans believe that the First Amendment goes too far in the rights it guarantees.” 2018’s results are consistent with the 2017 responses, finding that 23% of people feel the amendment does go too far, but the majority disagree with that statement. The validity of people’s opinions regarding the First Amendment, when they can’t even name the freedoms protected by it, seems absurd to a level worthy of Beckett himself.

In more cheering news from the survey, 74% of people polled feel that it is important that the media act as a “watchdog on the government” – a 5% increase from last year. With the Freedom of the Press deteriorating around the world , that statistic might demonstrate a much needed increase of faith in our media.

Here at CBLDF, we’ll continue to fight for the freedoms promised in the First Amendment, despite 40% of the population not being exactly sure what that means. Although, if any of Comic Book Legal Defense Fund supporters were polled, it was the one that knew all five freedoms, without a doubt.

← A Tale of Two Kitties (and Two Annes): The Censorship of Anne Frank
Banned Comics for the End of Summer Reading →