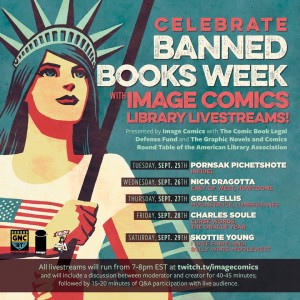 Banned Books Week is almost over, but now that the weekend is here, there are two more chances to get to celebrate reading with top comics professionals. Friday and Saturday night from 7pm – 8pm EST, tune in to Image’s Library Livestream and watch in-depth conversations about creativity, censorship, and comics. Celebrate Banned Books Week with Image Comics, Comic Book Legal Defense Fund, and The Graphic Novels and Comics Round Table of the American Library Association as they bring fun and educational programming to local libraries across the country.

Friday night beginning at 7pm, enjoy a conversation with jack-of-all-trades, Charles Soule. Soule is a musician and attorney, in addition to being a New York Times bestselling comic book writer. Known for his work on Daredevil, She-Hulk, and the comic that inspired the hit movie Logan, Death of Wolverine, as well as his creator owner series Curse Words from Image Comics, and Letter 44 from Oni Press.

Saturday at 7pm, virtually sit down with Skottie Young, one of the top comics illustrators working today. Young is known for his Image comics series I Hate Fairyland, as well as Rocket Raccoon, and illustrating Neil Gaiman’s Fortunately, The Milk. Young got his start at Marvel working on such popular characters as Spider-Man, The Human Torch, and Venom.

Both Library Livestreams will consist of a 45 minute discussion between the featured comics professional and a moderator, followed by a 15 minute Q&A with the live audience. Anyone can tune in, so grab some friends, family, classmates, or your local comic book club and enjoy Banned Books Week while getting a behind the scenes look at the world of professional comics.

“Freedom of expression is a core value at Image Comics,” said Eric Stephenson, Publisher at Image Comics. “Banned Books Week is an important opportunity to reflect on why free speech matters, and why this year’s Banned Books Week theme, ‘Banning Books Silences Stories’ is such a resonant one. Not too long ago, comics of all kinds were silenced, and today we see comics by marginalized voices as the most frequently challenged. We’re proud of our creators who are participating in these Library Livestreams and thrilled to be a partner with CBLDF and the ALA Graphic Novels and Comics Round Table to advance the discussion about the power of free expression. In our challenging times, this conversation is one of the most important ones of all.”

Simply visit the Image Comics Twitch page at https://www.twitch.tv/imagecomics. All webinars will run from 7-8pm EST and will include a discussion between moderator and creator for 40-45 minutes, followed by 15-20 minutes of Q&A participation with the live audience. No registration is required to view these livestreams.
– See more at Image Comics.