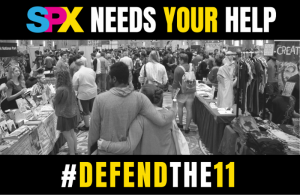 Following up on an announcement made last week, SPX has announced the launch of a GoFundMe campaign to support eleven members of the independent comics community fighting a defamation case. The full announcement follows:

Last month, eleven members of the independent comics community and one publisher were served with a defamation lawsuit because of concerns they raised about a fellow creator’s alleged pattern of sexual misconduct.

SPX has established the Defend The 11 legal aid fund to help these members of our creative community in their time of need. SPX is organizing this fund in consultation with the Comic Book Legal Defense Fund, which brings legal and fundraising experience to the effort.

Of this next step in SPX’s fundraising support for the defendants, SPX Executive Director Warren Bernard said, “The response from our creative community about this case has been overwhelming. Now is the time to turn that rightful outrage into action. Contributing to this fundraiser, or helping us share it widely are steps that anyone can take to defend the eleven and in doing so, defend the kind of community we want to be a part of.”

Bernard continued, “Cases of this nature can continue for years, and cost hundreds of thousands of dollars. When news of the lawsuit reached us, $20,000 was pledged to ensure these creators have immediate access to quality legal representation – but defending these charges of defamation is likely to be a long and expensive process. Most of that initial $20,000 SPX commitment from has already been spent to pay legal bills.”

SPX announced its intent to establish a legal aid fund in a September 1, 2018 joint statement with the Comic Book Legal Defense Fund’s new President, Christina Merkler. SPX’s annual comic arts festival takes place this weekend in Bethesda, Maryland. In addition to the GoFundMe campaign, those wishing to donate to the #Defendthe11 legal aid fund can do so in-person at the festival.