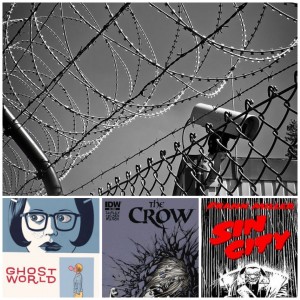 Comics, manga, and art books figure heavily in the list of 950 books and periodicals banned by the Louisiana Department of Corrections (LDOC). The list itself was uncovered by The Times-Picayune following a public records request. Many inmate advocate groups in the area, including the Louisiana ACLU and Books 2 Prisoners, a New Orleans based nonprofit that sends reading materials to prisoners, were aware that not all titles were allowed, but were unaware there was an official list the LDOC used.

Bruce Hamilton, an attorney for the Louisiana ACLU, told The Times-Picayune “[L]DOC has taken it upon itself to ban hundreds of books and magazines on a vast array of topics – from health and wellness to current events – going far beyond what is necessary for security. This level of censorship is unjustified, unacceptable and totally at odds with the Department’s mission and obligations to the people of Louisiana.”

The comics on the list run the gamut from Frank Miller’s Sin City to Daniel Clowes’ Ghost World. While not addressing the graphic novels specifically, but rather the list as a whole, LDOC Communications Director Ken Pastorick told the Times-Picayune “Books that could be seen as divisive or provocative, those are the kinds of things we don’t want in our institutions.” This includes “Racially inflammatory material or material that could cause a threat to the offender population, staff and security of the facility.”

One of the hardest hit genres are books about how to draw, including books on drawing manga and comics. These are often banned because they contain images of figures either not fully dressed or in what the LDOC would say are suggestive positions. But as anyone who has ever attempted to draw figures knows, that’s because the instructions are showing the musculature, and different positions to show the way that the anatomy changes with the position.

Books on drawing are often some of the most requested books by incarcerated individuals. One of the struggles for people in prison is passing the time in a constructive way. Drawing is something most can do in their cell, and develops a creative way to occupy their time as well as process their thoughts and feelings. These books should be championed by those in charge of rehabilitating inmates, not restricted due to some misconceptions that figure drawing is pornography.

Comics in general can be a great way to encourage reading in people who traditionally haven’t considered themselves avid readers. They teach visual literacy, improve vocabulary, create confidence in the readers own skills, and of course, all reading develops empathy. If you’re interested in helping inmates at prisons get access to comics and and books on drawing, check and see if you have a local charity like Books 2 Prisoners, or Books Through Bars, and find out what kinds of books are requested. It doesn’t fix the overarching problem of censorship in jails, but it does put books in the hands of individuals who need them, and that is a small victory.

Check out the full list of banned titles below:

Louisiana Department of Cor… by on Scribd