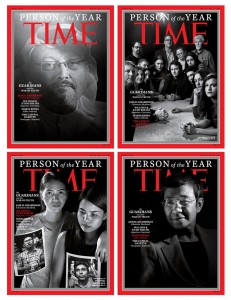 TIME Magazine has announced their annually anticipated person of the year for 2018, the honor is bestowed this year on four journalists and one news organization who have lost their lives or freedom in pursuit of the truth.TIME’s editor-in-chief Edward Felsenthal wrote in an essay about the selection, “Like all human gifts, courage comes to us at varying levels and at varying moments. This year we are recognizing four journalists and one news organization who have paid a terrible price to seize the challenge of this moment.”

The four distinct covers feature murdered Washington Post journalist Jamal Khashoggi; Maria Ressa, who’s been recently released on bail for trumped up charges of tax evasion designed to silence her independent news site Rappler; Wa Lone and Kyaw Soe Oo, the two Reuter’s journalists sentenced to seven years each for supposedly violating Myanmar’s Official Secrets Act while investigating the massacre of Rohingya Muslims; and the Capital Gazzette of Annapolis, MD, the newsroom that suffered the loss of four journalists and a sales associate after a gunman opened fire on them in June.
Felsenthal continued in his essay, “They are representative of a broader fight by countless others around the world — as of Dec. 10, at least 52 journalists have been murdered in 2018 — who risk all to tell the story of our time.” 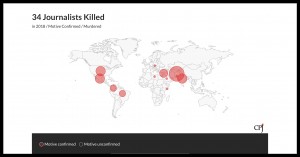 Back in April, Reporters Without Borders released the 2018 World Press Freedom Index, and at the time, it was widely reported that Freedom of the Press was under growing attack globally. Sadly it seems that the report, which demonstrated “growing animosity towards journalists,” accurately predicted what was an incredibly dangerous year for the fourth estate. The report warned, “Hostility towards the media, openly encouraged by political leaders, and the efforts of authoritarian regimes to export their vision of journalism pose a threat to democracies.”

Open hostility towards journalists from governments all over the globe have contributed to this epidemic of violence against those seeking to speak truth to power. Until claims of “fake news” and the press being “the true enemy of the people” are routinely called out for their harmful effects and the people who use them called out for inciting violence, they will continue. It is crucial for citizens to be the self-appointed custodians of the Freedom of the Press. In order to guarantee democracy at home and around the world, everyday individuals must become vigilant in monitoring the media, holding those who threaten the fourth estate accountable. Until those responsible for intimidating, imprisoning, and murdering journalists are punished for impeding free speech, no speech is safe anywhere in the world.