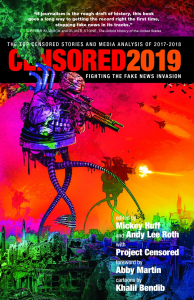 Project Censored has released their latest book detailing the top news stories from the year that didn’t receive national coverage, as well as the distractions, propaganda, and nonsense that took the place of important stories in 2018. According to Paul Rosenberg at NewsReview, Censored 2019: Fighting the Fake News Invasion editors, Andy Lee Roth and Mickey Huff, say the book can be read one of two ways:
“as a critique of the shortcomings of U.S. corporate news media for their failure to adequately cover these stories, or as a celebration of independent news media, without which we would remain either uninformed or misinformed about these crucial stories and issues.”

Project Censored is a nonprofit that works to promote media literacy and educate the public on the critical importance of a free press. They work each year to expose news censorship and empower independent journalism. They have been publishing an independent report each year since 1996 on the most stories most censored by corporate news. They also have weekly radio broadcasts, campus programs to encourage independent investigative journalism, and do additional work with communities to highlight the importance of a free press.

While flipping through the most censored stories of the year, it’s easy to wonder how important stories aren’t getting the attention they need. In a world with 24 hour news networks fighting for viewers, where everyday people having access to newspapers from around the globe, and an infinite number of new aggregator sites desperate for more people to increase their advertising revenue – how are stories being missed? But then as the top ten unfolds, it paints a convincing picture, not just of what has been left unreported, but why these particular stories weren’t reported, and how that reflects on the concept of a free media.

In 2017 the FBI’s counterterrorism division produced a warning for “black identity extremists” which is an imaginary group of terrorists, created with the political agenda of balancing out the scores of white supremacy groups increasing in activity. As former FBI agent Mike German put it, “The use of terms like ’black identity extremists’ is part of a longstanding FBI attempt to define a movement where none exists. Basically, it’s black people who scare them.”

In March 2017, the government of New Zealand ended a 140-year dispute with an indigenous Maori tribe by enacting a law that officially recognized the Whanganui River, which the tribe considers its ancestor, as a living entity with rights.

The idea that nature could have rights has already been accepted in some South American and American communities. So basically if the Supreme Court can decide that corporations are people with rights, what is stopping them from deciding Standing Rock is a person with rights as well? Developing a legal framework with which to work in could change the way in which environmental issues are handled, moving them front and center where some certainly feel they belong.

According to Project Censored: “The CLOUD Act enables the U.S. government to acquire data across international borders regardless of other nations’ data privacy laws and without the need for warrants.” The CLOUD Act was attached to an omnibus spending bill, so it was not vetted, and there were no hearings on it. It is currently the law.

7. Regenerative Agriculture is Civilization’s “Next Stage”

There’s a way to fight climate change with agriculture while also getting the crops to yield more food. Basically we could fight hunger and help the environment by implementing something called “regenerative agriculture” and we’re opting not to do it.

Ronnie Cummins, who wrote the report on this and is the director of the Organic Consumers Associations and a founding member of Regeneration International explained it like this,

Out-of-touch and out-of-control governments of the world now take our tax money and spend $500 billion … a year mainly subsidizing 50 million industrial farmers to do the wrong thing,” Cummins wrote. “Meanwhile, 700 million small family farms and herders, comprising the 3 billion people who produce 70 percent of the world’s food on just 25 percent of the world’s acreage, struggle to make ends meet.

6. Russiagate: A Two-Headed Monster of Propaganda and Censorship

Here Project Censored looks at the result of corporate news focusing so much of its attention on just one line of stories and concerns, meanwhile silencing journalists who call into question the necessity of ignoring important news worthy events in favor of stoking fear and aggression in news viewers. While this entry does deal with stories being silenced by corporate news structures, it also attempts to deal with the complexities involved in current news coverage of Russia.

In a news story that is certain to disappoint many and surprise few, it was reported on that The Washington Post put new rules in place that require employees to self-censor their social media feeds to ensure they do not offend or criticize “advertisers, subscribers, vendors, suppliers or partners.” Failure to comply with this rule could lead to punishment up to and including termination. The advertisers for The Post include Big Pharma companies, finance giants, and the perpetually shady Koch Industries.

4. How Big Wireless Convinced Us Cell Phones and Wi-Fi are Safe

Yeah, they probably aren’t. Everyone should read this story and decide for themselves.

Here’s another story that will disappoint many and surprise no one. Project Censored feels that corporate news has been quick to cover billionaires but often ignores the millions living in poverty. For example, many major news outlets declined to cover the Credit Suisse report stating that 1% of the population holds 50% of the wealth. According to The Guardian who reported on the November 2017 report from Credit Suisse, “At the other end of the spectrum, the world’s 3.5 billion poorest adults each have assets of less than $10,000. Collectively these people, who account for 70 percent of the world’s working age population, account for just 2.7 percent of global wealth.”

According to Project Censored “Tremendous concentration of wealth and the extreme poverty that results from it are problems that affect everyone in the world, but wealth inequalities do not receive nearly as much attention as they should in the establishment press.”

This is fascinating, because while no one could turn on a tv or open a news paper for a while without seeing the name WikiLeaks, the real story in the release of Vault 7 got buried by many news organizations.

In a 2016 report for The Nation, [Tim] Shorrock estimated that 80 percent of 58,000 private intelligence contractors worked for the five largest companies. He concluded that “not only has intelligence been privatized to an unimaginable degree, but an unprecedented consolidation of corporate power inside U.S. intelligence has left the country dangerously dependent on a handful of companies for its spying and surveillance needs.”

It also allows the CIA and other intelligence agencies to gain access to information gather by methods they’ve been legally prohibited from using.

A 2018 survey conducted in response to global concerns about rising authoritarianism and nationalism shows a major decrease in nations adhering to basic human rights. As the Guardian reported, the World Justice Project (WJP)’s “Rule of Law Index 2017–2018” examined legal systems around the world by documenting the experiences of 110,000 households and 3,000 experts and comparing the data with results from previous years. The WJP’s Index tabulated these results to calculate scores in eight different categories, including constraints on government powers, absence of corruption, open government, regulatory enforcement, and civil justice, providing an overview of changes in the rule of law since the previous Index was published in October 2016.

In summarizing the WJP’s findings, the Guardian’s report quoted Samuel Moyn, a professor of law and history at Yale University: “All signs point to a crisis not just for human rights, but for the human rights movement. Within many nations, these fundamental rights are falling prey to the backlash against a globalising economy in which the rich are winning.”

Check out Rosenberg’s review to see a great in-depth look at the top 10 most censored stories from 2018. Or check out Project Censored’s website, to see the Top 25 most censored stories from 2017/2018. Or better yet, just grab a copy of Censored 2019: Fighting the Fake News Invasion ($18.95, Seven Stories Press) – with the awesome cartoons by Khalil Bendib and the killer cover by Anson Steven-Bollen saluting the 80th Anniversary of War of the Worlds, it’s a great addition to ever free speech advocates library.