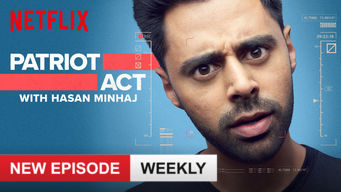 According to a Financial Times article, Netflix recently removed an episode of Patriot Act with Hassan Minhaj that was critical of Saudi Arabia after the kingdom threatened the episode was in breach of their internet cyber-crimes laws. The episode in question, episode 2 simply titled Saudi Arabia, is still available to watch outside of Saudi Arabia, which is how Netflix was able to say that, “[They] strongly support artistic freedom worldwide and only removed this episode in Saudi Arabia after [they] had received a valid legal request — and to comply with local law.”

In the wake of journalist Jamal Khashoggi’s death, Hasan exposes grim truths about Saudi Arabia and the charismatic crown prince known as “MBS.”

Minhaj is an actor and writer who first came to national attention through his appearances on The Daily Show and hosting the 2017 White House Correspondents Dinner. October 28th, 2018 was the initial drop of the first two episodes of Patriot Act, bringing Minhaj to Netflix’s vast captive audience with the intention of making viewers laugh and think as he sets up episodes to explain crucial global issues in a comedic way.

As a Muslim-American, Minhaj criticizes Saudi Arabia, the home to Mecca and Medina, the two holiest cities in the Muslim religion, as not living up to the ideals of Muslims around the world. He addresses the human rights violations, the atrocities of the bombing of Yemen, and of course the assignation and dismemberment of the journalist Jamal Khashoggi. Minhaj breaks down the appearance of Saudi Crown Prince Muhammad Bin Salman as a reformer, and the realities of the “MBS” as just another Saudi Prince “getting away with autocratic shit like this for years with almost no blowback from the international community.”

According to Financial Times,

Netflix said the Saudi telecoms regulator cited Article 6 of the law as reason for the request. The article states that “production, preparation, transmission, or storage of material impinging on public order, religious values, public morals, and privacy, through the information network or computers” is a crime punishable by up to five years in prison and a fine not exceeding SR3m ($800,000).

This has opened up a dialogue about technology companies following a transparent and regulated guide to handling attempts to restrict content. Same as when individuals and organizations attempt to restrict access to books and comics, having a strong set of guidelines in place to handle situations like this, can help avoid violating the rights of viewers and readers to free expression.

Financial Times reported that “Experts say companies should be transparent about removing or restricting content, with a clear policy of conducting due diligence on government requests that follow legal procedures.”

And Rebecca MacKinnon, director of the Ranking Digital Rights project at the New America Foundation said, “If they are not doing all these things then they are not following established industry best practice for being accountable and responsible in handling government demands to restrict content.”

Netflix said its own policy of following local laws is the standard for other tech companies based in the US, but it doesn’t offer any transparency as to how often requests like these occur or how often content is removed to comply with individual local laws.

As of a couple days ago, even though the episode was removed from Netflix in Saudi Arabia, it was still available on the Patriot Act’s official YouTube channel in the country. If it is taken down from YouTube as well, there’s little doubt that people within the country, which has a large population under 35  years old, will find some other way to access the restricted content. Nothing makes something so interesting as restricting access to it.