In 2018, Image Comics celebrated Banned Books Week with Comic Book Legal Defense Fund and The Graphic Novels and Comics Round Table of the American Library Association by producing a week of Library Livestreams featuring creators Nick Dragotta (East of West), Grace Ellis (Moonstruck, Lumberjanes), Pornsak Pichetshote (Infidel), Shannon Wheeler (Too Much Coffee Man), and Skottie Young (I Hate Fairyland, Bully Wars, Middlewest). For Banned Books Week, September 23rd-29th, libraries around the country were invited to watch these exciting creator conversations on creativity, freedom of expression, and the power of storytelling, live as they happened. Now they can be viewed on-demand, making them excellent resources for educators, librarians, graphic novel readers, as well as, writers and artists interested in the comics format and freedom of expression.

Each Library Livestream is a 45 minute conversation followed with a Q&A with the live audience the night of the Livestream. 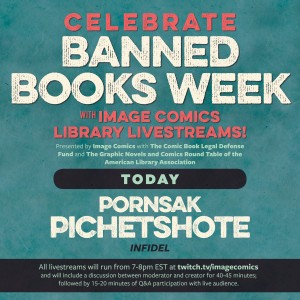 Pornsak Pichetshote was an all-star editor at DC’s Vertigo imprint, ushering bestselling and beloved comics to print like Sandman, Swamp Thing, Daytripper, Sweet Tooth and many more. Pichetshote left editing to tackle new media and oversaw the TV Department for DC Entertainment. Now he’s added comics author to his repertoire, with Infidel, which topped many of the “Best of 2018” lists. Listen in as he talks about his impressive career and what it’s like to work in many facets of the comics industry plus much more. 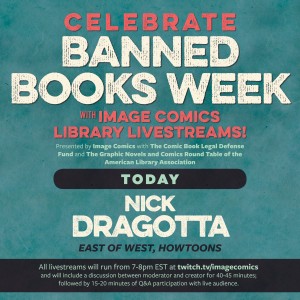 Nick Dragotta created East of West with writer Jonathan Hickman, after working together on Marvel’s FF. Dragotta also worked as an artist on many of the top characters at Marvel, like Captain American and Spider-Man, as well as the landmark run of X-Statix with Peter Mulligan. Listen in on an entertaining dialogue with an experienced artist and comics creator. 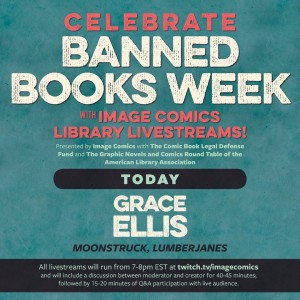 Grace Ellis is a writer best known for being part of the stellar team that created Lumberjanes, the New York Times Bestselling YA comic that has taken home two Eisner Awards and was twice nominated for GLAAD Awards. Ellis has also created and written the comic Moonstruck and contributed several episodes to the animated TV show Bravest Warriors.

Afterwards, check out the CBLDF guide for Using Graphic Novels in Education and see how to integrate Lumberjanes into a curriculum. 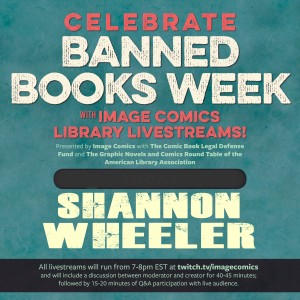 Shannon Wheeler is an award-winning cartoonist best known as the creator of the satirical superhero Too Much Coffee Man, who has appeared around the world in comic books, newspapers, magazines, books, and even his very own opera. He has also created the strip “Postage Stamp Funnies” for the Onion, illustrated several books including I Thought You Would Be Funnier, Grandpa Won’t Wake Up, and Oil & Water, and frequently contributes cartoons to the New Yorker. With writer Mark Russell, he co-created the acclaimed book God Is Disappointed in You (a tongue-in-cheek retelling of the Bible) and its sequel Apocrypha Now. 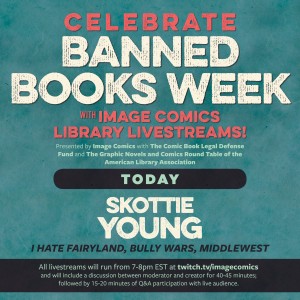 Virtually sit down with Skottie Young, one of the top comics illustrators working today. Young is known for his Image comics series I Hate Fairyland, as well as Rocket Raccoon, and illustrating Neil Gaiman’s Fortunately, The Milk. Young got his start at Marvel working on such favorite characters as Spider-Man, The Human Torch, and Venom. Listen to him chat about creativity, free expression, and much more.