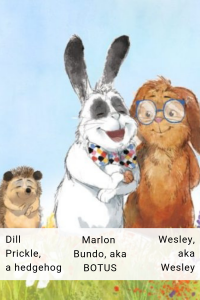 A teacher in Seminole County, Florida is under investigation for reading an age-appropriate book about two gay bunnies to his first-grade class. According to local news in the area, the investigation came in response to complaints from several parents about the teacher reading A Day in the Life of Marlon Bundo, which is not a district-approved book, to his class several weeks ago. No news report clarified how often books are read to classes without getting district approval first, or how frequently the district approves new books. This investigation is just one of many examples where books are targeted for not being “age-appropriate,” not because of their content, but because of the existence of LGBTQIA characters.

Despite the humble beginnings of Marlon Bundo, the book’s author, Jill Twiss, and the show host, John Oliver, both assure viewers, readers, parents and anyone who cares to listen, that the book is a children’s book. Even Common Sense Media, a group that rates media (which is not a good thing, but that can be saved for another day) gave the book four out of five stars and said it was appropriate for readers over the age of four years old. First graders typically are six to seven years old.

The book itself centers around Marlon Bundo, aka BOTUS (Bunny of the United States), who meets a handsome, bespectacled, bunny named Wesley and falls in love. Marlon and Wesley decide they want to get married, but The Stinkbug (who has creepily immovable white hair) tells them “boy bunnies don’t marry boy bunnies” and being “different is bad.” I won’t spoil the story for anyone who hasn’t read it yet but suffice it to say, it’s a kid’s book and has a sweet ending.

Local news quoted Wendy Curry, (who they referenced as having a gay son, but not her relation to the student) as saying, “It’s not something that should be in an elementary school. That’s for me to decide at home — what I want to teach my child and what I feel they are able to handle.”

Kraig Hudson, a grandparent of a student in the class, told the local news, “I don’t think it’s fair they are not telling the other parents about what they read. Noah comes home one day and asks us if it’s OK for two male bunnies to get married. I said, ‘By our beliefs, no. But we do not judge nobody.”

While most are probably surprised to discover anyone had strong personal beliefs on bunny marriage, the real problem here is that some people can’t separate the existence of fictional LGBTQIA characters (or real LGBTQIA people) from sex. The LGBTQIA community has been trying to teach the majority, with limited success, that it isn’t about sex, it is about love – love is love, being the obvious catchphrase for a while now. And Marlon Bundo isn’t about sex, it is about love. And it teaches kids that being different isn’t bad, it’s wonderful. There’s also a pretty nice civics lesson in the book for children, and a great pun too. It’s a kids book. It isn’t confusing or inappropriate – unless you are a person who believes that the existence of LGBTQIA people is confusing and inappropriate.

While the teacher is under investigation, he is still teaching. Hopefully, the school stands with the educator – who has spent years studying and training to do his job. It is Florida though, where they’ve passed legislation allowing any citizens to voice complaints about textbooks, so who knows what they’ll decide.

Support the freedom to read by becoming a CBLDF member in 2019! In February, supporters can help fight for free expression with any Humble Bundle too!

Patricia Mastricolo is the editorial coordinator for Comic Book Legal Defense Fund. When she isn’t writing about attempts to erode the First Amendment, she’s listening to Bowie and thinking up plurals for the word “apocalypse.”