Editorial Note: This article originally appeared on CreatorLaw.com. Due the complex nature of obscenity laws, we thought it would be interesting for CBLDF readers to get further insight into what these standards mean. To understand how the complexity can be easily misunderstood, even by those that write legislation, check out a CBLDF.org article about a failed attempt to alter obscenity laws in Maine. 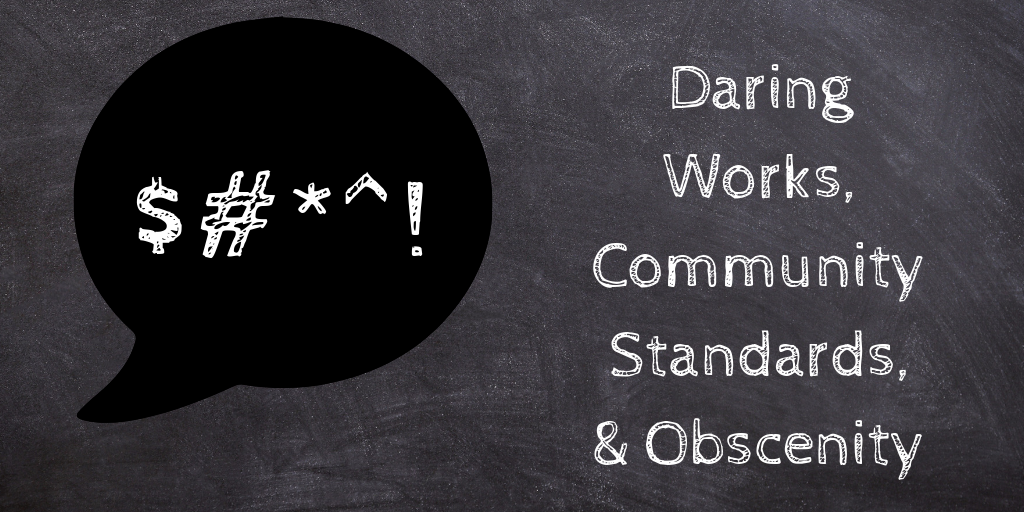 You’ve proudly finished your new graphic novel and purchased space in artist alleys at comic conventions across the country to unleash your work on the world. Your friends think the book is edgy, daring, and sexy; your Aunt Mildred thinks . . . well, she wouldn’t quite get it if she saw it.

But what if it’s too edgy and daring? What if parts of it might even be labeled “obscene” in some of the locales on your convention schedule? The standards for defining and regulating obscene material have been the subject of numerous cases before the United States Supreme Court, and decisions from the 1950s through the late 1980s still impact artistic expressions today.

In 1957, the United States Supreme Court in Roth v. U.S. held that obscenity was not protected by the First Amendment. The Court recognized that “all ideas having even the slightest redeeming social importance” are protected, but obscene material is, by definition, “utterly without redeeming social importance.” However, the Court also noted that “sex and obscenity are not synonymous” and obscene material “deals with sex in a manner appealing to prurient interest.” (In a footnote, the Court defined “prurient interest” as “material having a tendency to excite lustful thoughts,” which is arguably a pretty low threshold). The Court articulated the test for finding material to be obscene: “whether to the average person, applying contemporary community standards, the dominant theme of the material taken as a whole appeals to prurient interest.”

Despite its brevity, there’s a lot to unpack in the Roth test. What is an average person? What is the relevant community? How does a jury determine the standards of the community? How much of the material must be prurient to become the dominant theme? The Supreme Court spent the next thirty years explaining that test and attempting to answer those questions and others. The issue became so contentious that in some cases the Justices could not agree on the reasoning for their decisions, and their opinions were splintered. For example, seven years later in Jacobellis v. State of Ohio, a plurality of the Justices (but not a majority) explained that material that advocates ideas cannot be obscene, and that constitutional protections are not determined by weighing the prurient appeal against the social importance because works are protected “unless it is ‘utterly’ without social importance.” The same group of Justices also reasoned that the “contemporary community standards” should be nationwide rather than local standards, because constitutional protections should not vary across state, county or town lines. The Justices went on to explain that a legitimate interest in protecting children could not be invoked to effectively reduce the entire adult population to reading only what is fit for children. Other Justices opined that the First Amendment provided absolute protection regardless of content, and Justice Stewart famously concurred that although he could not define obscenity, “I know it when I see it, and the motion picture involved in this case is not that.”

The test underwent further refinement and narrowing in later cases, but in 1973 a major shift occurred in Miller v. California. In that case, a majority of the Court held that the requirement that the material be “utterly without redeeming social value” was both meaningless and placed a nearly impossible burden on prosecutors to prove a negative, so the Court created a new test:

(a) whether the average person, applying contemporary community standards would find that the work, taken as whole, appeals to prurient interest;

(b) whether the work depicts or describes, in a patently offensive way, sexual conduct specifically defined by the applicable state law; and

(c) whether the work, taken as a whole, lacks serious literary, artistic, political, or scientific value.

The Miller decision eliminated the requirement that the work be “utterly” without social value and replaced it with a more censorship-friendly standard that the work lacks serious literary, artistic, political, or scientific value. The decision also rejected the application of a “national standard” for juries to determine what appeals to “prurient interest” and is “patently offensive” and instead held that “community standards” meant just that. However, as confirmed more than a decade later in Pope v. Illinois, the final inquiry of whether the work lacked serious literary, artistic, political, or scientific value is not subject to contemporary community standards but instead is an objective test, judged by whether a reasonable person could find such value in the work.

Even with decades of tweaking and redefining, troubling issues still remain for artists and writers. For example, there are questions as to how the geographic boundaries of the relevant community are determined, how juries are to apply community standards that may differ from their own predilections, especially because, as Justice Stevens noted in one dissenting opinion, an average juror “may well have one reaction to sexually oriented materials in a completely private setting and entirely different reaction is a social context.” Whether a juror could find that a work appeals to prurient interest and describes sexual conduct in a patently offensive way under local community standards but, nonetheless, has serious literary or artistic value under a “reasonable person” standard is questionable as well.

When offering material at conventions, store signings, or other public appearances, creators may wish to heed the reasoning provided by the majority of Justices in Miller that there is no First Amendment requirement “that the people of Maine or Mississippi accept public depiction of conduct found tolerable in Las Vegas, or in New York City.” In other words, know your audience. If your material is edgy or pushes boundaries, it wouldn’t hurt to ask your attorney to check the obscenity laws of the particular locales where you will be displaying and selling your work.