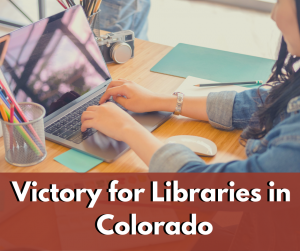 The preposterous lawsuit against the Colorado Library Consortium (CLiC) and EBSCO, a media aggregate database company, purporting the two conspired to traffic pornography to school children, has been dismissed with prejudice, meaning it can not be brought refiled. While this seems a victory for students’ First Amendment rights, it’s a mixed blessing for the nonprofit CLiC that had to spend time, money, and energy fighting a frivolous lawsuit designed to bully them into censoring information.

The lawsuit was filed, back in October, by The Thomas More Society on behalf of two Colorado parents who founded Pornography Is Not Education (PINE) and have been campaigning for over two years to have EBSCO removed from libraries and schools. It claimed EBSCO “knowingly provides sexually explicit and obscene materials to school children” and that CLiC “purchases from EBSCO and knowingly brokers sexually explicit, obscene, and harmful materials to Colorado school children.” For those not aware, CLiC is a nonprofit that helps Colorado libraries save money by purchasing items like a larger group, and offers continuing education for the staff of libraries across the state too. Aside from the two parents who’ve been waging this misinformation campaign, no one in their right mind would see CLiC as some mustache-twirling villain, willfully harming school children.

EBSCO is used by school children and library patrons to cull search results into manageable amounts by providing full-text results from common periodicals, journals, and newspapers. The parents behind this lawsuit and others like it, claim that it pushes pornography to the top of benign searches. As James LaRue, wrote in his response to repeated attacks on databases, Education is not Pornography, “If middle or high school students are looking for sex on the internet, they do not start with library databases.”

The content curated for databases like EBSCO is from mainstream sources that could be found at any newsstand or Barnes & Noble. According to an audit of the top search terms done by LaRue in 2017 for his article False Witness, the searches done by students seem to be precisely what would be expected of them while doing homework, looking for articles about science in today’s society like climate change data, or on “social issues as abortion, gun control, and cyberbullying. They were not looking for sites featuring gay sex. There were no pornographic terms in the top 100 [search terms].”

Jim Duncan, director of the Colorado Library Consortium, told local news he had tried to get librarians to replicate the searches PINE insisted led to pornography.

“We asked librarians, ‘Please, try to validate, try to replicate these claims,’ and to date, we’ve not had a librarian come back to us and say ‘Oh yeah, we found it.'” said  Duncan. “We end up scratching our heads and saying ‘What was this all about?'”

Despite the dismissal, the Thomas More Society released a statement maintaining their righteous indignation, and continuing to claim EBSCO “knowingly has imbedded (sic) pornography in databases it markets for use by unsuspecting school children in grades K-12.”

According to a local news source, the statement claims, “The parents’ voluntary dismissal has nothing to do with the merits of the lawsuit against EBSCO and the Library Consortium. They stand behind the allegations in the lawsuit entirely.”

So why, if they are so confident that they are right and so adamant that EBSCO and CLiC are harming children, did they agree to dismiss the case with prejudice, preventing any possibility to retry the suit? Because if they lost, they would have had to pay EBSCO and CLiC’s legal fees. They claim this Colorado rule is “peculiar and harsh,” but perhaps it’s not harsh enough.

PINE sued EBSCO and CLiC based on outrageous circumstances that no one seemed to be able to duplicate. They were able to say make repeated claims that were unverified in the media. And then, instead of being forced to prove in a court of law that they hadn’t been lying for the last six months, they were able to drop the case –leaving CLiC and EBSCO holding the bag. According to one report, CLiC spent $35,000 in legal fees. Jim Duncan, the director of the consortium, says that money could have paid the salary of a library aide for an entire year or purchased new materials for a small library for seven years.

While it is excellent that EBSCO and CLiC are no longer facing these outrageous charges, it is a shame that CLiC was forced to shell out money on legal fees, that could have been better spent providing new resources for the people of Colorado. Opponents of free speech have decided that they can chill speech without actually censoring anything, just by making the consequences of coming across their radar so expensive, that many institutions will not purchase databases like EBSCO in the future. By LaRue’s estimate in October, “130+ schools have quietly removed the resource. It may be higher.”

Why do special interest groups like PINE go after educational resources like EBSCO anyway? It’s difficult not to see this as another aspect of the campaign to remove “controversial” topics from textbooks around the country. Like the textbook law in Florida (both the current one and the amended one they are trying to pass) there is an element to it that is concerned with wasting as much time, money, and resources of their opponents as possible. But beyond that, there is also the deeply held need to control the education narrative and move it away from facts with which these special interest groups don’t agree. Removing access to information so students can not make their own mind up about “controversial” topics like climate change, civil rights, and gun control seems to be at the heart of these challenges.

Control is control, whether special interest groups seek to remove comics featuring LGBTQIA characters, or databases with unfettered access to facts they don’t like. Now PINE has figured out a way to financially punish those that stand up and fight for freedom of information, and challenges like this one are increasing in quantity and vitriol across the country. Now it is critical to stay vigilant, band together, and fight back for free speech and First Amendment rights for everyone.

Fight alongside CBLDF on the front lines of free expression by becoming a member today!