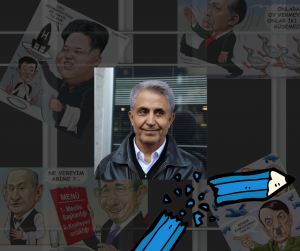 Almost exactly one year after award-winning editorial cartoonist was released from prison to await appeal, he has turned himself in to serve a sentence for “supporting terrorism” with his colleagues from the Turkish paper Cumhuriyet. The official charge leveled against 14 journalists for Cumhuriyet was that of “aiding a terror group without being a member” after a failed coup d’état which the paper had nothing to do with. It is obvious to the entire world that the Musa Kart and his peers are in jail for their critical reporting of Turkey’s President Recep Tayyip Erdoğan.

After several of the appeals failed in February, it became a looming possibility that Kart could be arrested at any moment. When word spread that arrest orders had been issued for Kart and his colleagues, they chose to turn themselves in at a time and place of their own choosing, an act of bravery and dignity unsurprising to both those who know them or have followed this case from afar.

Cartoonists Rights International Network (CRNI), who have worked tirelessly on Kart’s behalf to draw global attention to this injustice and entreat diplomatic groups to secure the cartoonist’s freedom, reported that Kart told reporters outside of the jail:

“I believe people will see the injustice that is being done here. Several brave reporters have recently summarized what’s happening in Turkey: people who punch the leader of a major political party are permitted to go free while those who draw cartoons or report the news are put in prison. We look forward to the day when journalists need not make proclamations such as these in front of prison gates.”

Before their guilty verdicts and subsequent release from jail to await appeal, the defendants from Cumhuriyet were imprisoned for 9 months. While they were arrested for supposedly supporting Kurdish militants and the Gulenist movement following a failed 2016 coup d’état, there were no indictments brought for months, leaving the journalists languishing in jail without being able to see their families or any hope of trial.

Once the trial finally did commence, Kart took the stand and spoke eloquently about the ludicrous claims that his paper and himself were aligned with terrorists, as well as editorial cartoonists the world around being poor choices for subservience to either terrorists or authoritarian regimes,

I have had the privilege of being Cumhuriyet newspaper’s cartoonist for twenty-three years. If some unprejudiced research had been conducted in this case it would have been seen that my signature is there, under the most scathing cartoons of terrorist organisations, primarily those of FETÖ. And the fact that these anti-terrorist cartoons have appeared on the front page for the last six years is further proof that my paper should not be held up as being aligned with a terrorist organisation… 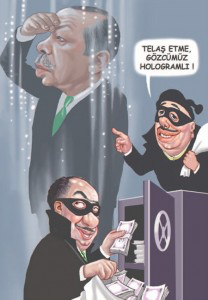 In February of 2014, Kart criticized President Erdoğan’s apparent role in a graft scandal and simultaneously mocked a speech that he gave via hologram at a party meeting. In the cartoon, Erdoğan’s digital doppelgänger stands by as one burglar counsels another: “Don’t rush, our watchman is a hologram.” In response, Erdoğan filed a criminal complaint against Kart which could have resulted in a prison sentence of nearly 10 years. Luckily, Kart was acquitted of insulting Erdoğan via cartoon, but Kart warned at the time that the repression of journalists in Turkey was only getting worse.

Even that was not the first time Kart’s work ran afoul of Erdoğan’s sensibilities. In 2005 the cartoonist drew the then prime minister as a kitten tangled in a ball of string. Kart was fined 5000 Turkish lira, although that verdict was later overturned. Erdoğan, now the authoritarian President of a country that has jailed the most journalists in the world, claimed that the cartoon caused him emotional distress.

“I believe in Turkey. I believe for Turks there is no night that lasts forever. Also in Turkey, the daylight will return.” – Musa Kart

Last year, Kart was honored for his bravery in the face of government oppression with the 2018 International Press Cartoon Prize by the Swiss Foundation Cartooning for Peace. This was a little over a week after he was found guilty with more than a dozen of his colleagues on terrorism charges. Due to the conviction, he was unable to travel to the ceremony to accept the award, so his wife and daughter went in his place and read a prepared statement.

“I really wish I could be among you today, but it seems that those who don’t like my cartoons also don’t like me to meet with you. Maybe this is the reason for why they banned me from traveling abroad, but I wish I could be there to hug and thank you,” Musa Kart said in his message, as he added that the award “honored me and gave me strength.”

Kart added, “You reminded me once again that I’m a member of world cartoonists family.”

In a video created for the award, Musa Kart laughingly relates that his wife tells him “your optimism will kill me someday” before he adds more seriously “I believe in Turkey. I believe for Turks there is no night that lasts forever. Also in Turkey, the daylight will return.” Beautiful sentiments that are juxtaposed over images of Kart showing his granddaughter how to color. Since that award, Kart has retired from professional cartooning to spend more time with his family. Hopefully, his beautiful optimism has not been too damaged by the continued persecution of him and his colleagues, but it’s hard to imagine that it hasn’t.

CRNI, who awarded Kart the 2005 Courage in Editorial Cartooning Award following the lawsuit from Erdoğan over the kitten cartoon, released a statement following Kart’s recent imprisonment. From that statement:

We categorically condemn the unjust criminal prosecution of Musa Kart. This is the climax of a fifteen year campaign of intimidation and persecution on the part of President Recep Erdoğan who has long harboured enmity toward Musa and indeed all critical voices in the Turkish press and media. Reporter Sans Frontières’ latest index places Turkey 157th out of 180 nations and says it remains the biggest jailer of journalists in the world.

We urge all concerned with press and media freedom to join in demands for the immediate release and total exoneration of Musa Kart and all his colleagues.

CBLDF stands with CRNI and the rest of the cartooning community, horrified by this injustice. We continue to hold out hope that the principles of free expression that govern so many countries Constitutions, will create pressure on Erdoğan to release these political prisoners. However, since Turkey is the largest jailer of journalists in the world, it seems unlikely that this will have a positive resolution.