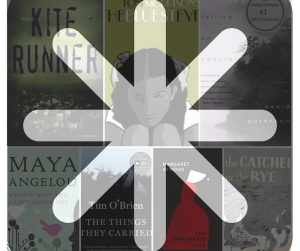 Conejo Valley School District in California is reconsidering their policy of asterisking books with mature content on syllabuses – again. This policy, which has only been in effect for about 18 months, has generated controversy, news articles, and seemingly endless School Board meetings. Now with a new majority on the school board, there’s a chance the misguided policy might finally be in its death throes.

After the failure to ban Part-Time Indian the Conejo Valley School District implemented a policy where they utilized the California Department of Education’s (CDE) website that (at the time) marked books written for adults with the following disclaimer:

This book was published for an adult readership and thus contains mature content. Before handing the text to a child, educators and parents should read the book and know the child.

The policy required teachers to use those asterisks and that disclaimer on all titles on their syllabuses that were marked similarly on the CDE website. But CDE’s site, after hearing how their annotations were being used, removed the asterisks and the disclaimer from their reading lists. Since the school policy required the teachers to use the CDE website to craft their syllabuses, the policy would need to be changed again. Some parents and teachers pointed out the clear correlation between the policy and the CDE removing the asterisks themselves, hoping the school board would see the errors of such a policy, and the adverse effect it could have on students’ rights to read. They did not.

The policy was written by Trustee Sandee Everett, who claims its aim is to protect students with a history of trauma. At a March School Board meeting, she said:

If there’s anything removed that would take away any of the hard-fought rights that we’ve given the kids, (that) would be very disappointing. We have kids in our community who are suffering, and they have been sexually abused, molested, raped, and they deserve to have someone tell them before they happen upon a passage in a book that graphically describes child rape.

But the asterisks haven’t only been used as trigger warnings for sexual assault in books like I Know Why the Cage Bird Sings by Maya Angelou, The Bluest Eye by Toni Morrison. Since the policy was adopted, books like The Things They Carried by Tim O’Brien, Bless Me, Ultima by Rudolfo Anaya, and The Catcher in the Rye by J.D. Salinger have also been marked, even though they contain no sexual assault.

The Thousand Oaks Acorn reported that, Betsy Connolly, a member of the new school board majority revisiting the policy, told the paper “that the only way she could support asterisks is if they were applied to every book because different families could object to a book for any number of reasons, but that would dilute the impact of the asterisk.” Connolly went on to say,

The Acorn also noted in two different published pieces, that Sandee Everett and her supporters, not only continue to be in favor of the asterisk policy but keep parroting to the board “let parents parent.”

As Cynthia Mayling writes in her letter to The Acorn,

Parents should indeed parent. That means looking at the titles on the syllabus (there are typically only two to four total) and deciding if you want to reference your own trusted sources to determine if your teen needs an alternative assignment.

Certainly, if you have a student with trauma in their past, you might want to consult with professionals familiar with your child’s particular needs and potential triggers. You probably wouldn’t and shouldn’t rely on an asterisk to meet their specialized needs.

It looks like the new board majority will explore strengthening alternate-assignment policies, which allow parents and students to opt out of books they are uncomfortable reading, in favor of a book with similar pedagogical merit. Policies built around letting teachers teach and an attitude of including more literature, not less, foster a strong atmosphere of intellectual freedom for students. Policies which mark some books as good and others as bad or wrong, instill erroneous ideas about reading and create petty arguments that go on for far too long. As Mayling points out,

The problem with school districts taking on the job of book reviewing/rating is that they then have to choose a source for the provided synopsis/asterisk. Which source should we choose? Who becomes the grantor of asterisk?

We will be back regularly arguing about which adjectives should be used to describe a story and how to properly summarize complex plot lines that require context for perspective. I’m exhausted just thinking about it.