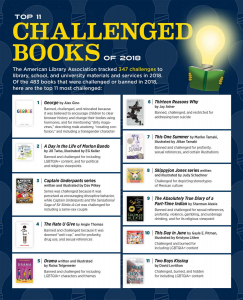 The American Library Association’s Office for Intellectual Freedom (ALA OIF) released their annual list of most frequently challenged and and banned books of 2018 and both Raina Telgemeier’s Drama, and This One Summer by Jillian and Mariko Tamaki are included in the Top 11. This is Drama’s fourth year as one of the most challenged and banned books, and the second appearance  for This One Summer after it topped the list in 2016. This data is based on 347 challenges to materials in libraries, schools, and universities that were reported to ALA OIF. 483 books were challenged or banned in 2018.

Once again this list is disproportionately filled with illustrated works, which make up more than half the titles. As for comics and graphic novels, which are over 18%  of the list, comprise a relatively small percentage of the books available in school curriculum and libraries, public libraries, and other institutions, making their prominence on a list like this concerning. As a partner in the Kids’ Right to Read Project, CBLDF has worked to assist educators and librarians who faced challenges to many of the titles on this year’s list.  Below we share this year’s Top 11. Beneath each title is the reason it was challenged, a brief description, and links to articles showing cases around the country.

Stay tuned throughout the week for more information and programs celebrating intellectual freedom and free expression since it is National Library Week! Use the hashtag #NationalLibraryWeek to read or talk about events and articles celebrating this American institution, and as always keep following CBLDF on Twitter and Instagram, or like us on Facebook to stay up to date with challenges and bans around the country.

← Conejo Valley, Return of the Asterisk Saga
Free Webinars for Educators and Librarians Center Around Comics →