The 2019 Pulitzer Prizes winners have been announced, and among the many talented journalists, photographers, authors, and musicians, were Wa Lone and Kyaw Soe Oo – the two Reuter’s journalists imprisoned for supposedly violating Myanmar’s Official Secrets Act while investigating the massacre of Rohingya Muslims. Darrin Bell, a talented cartoonist with two nationally syndicated comic strips, also won this year for his beautiful and poignant editorial cartoons that examine America today with unflinching honesty and dark humor.

The Pulitzer Prize is the highest honor recognized for achievement in journalism – whether newspaper, magazine, online, or photographic. Annual certificates and prizes of $15,000 are awarded in 20 categories, with the iconic gold medal going to the winner of the public service category. This year the pubic service recipient was South Florida Sun Sentinel “For exposing failings by school and law enforcement officials before and after the deadly shooting rampage at Marjory Stoneman Douglas High School.”

Wa Lone and Kyaw Soe Oo were part of the entire Reuters staff that was awarded the Pulitzer in the International Reporting category, “For expertly exposing the military units and Buddhist villagers responsible for the systematic expulsion and murder of Rohingya Muslims from Myanmar, courageous coverage that landed its reporters in prison.” This is not the first major honor bestowed on the imprisoned journalists, in December 2018 they were on one of the four covers of Time Magazine for Person of the Year.

Another group of journalists recognized by both Time Magazine for Person of the Year and the Pulitzers, was the Capitol Gazette in Annapolis, Maryland. They did not win a Pulitzer, but rather were granted “A special citation to honor the journalists, staff and editorial board … for their courageous response to the largest killing of journalists in U.S. history in their newsroom on June 28, 2018, and for demonstrating unflagging commitment to covering the news and serving their community at a time of unspeakable grief. The citation comes with a $100,000 bequest by the Pulitzer Board to be used to further the newspaper’s journalistic mission.” 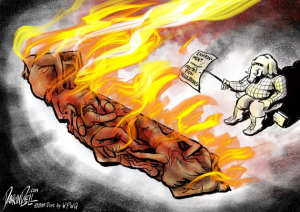 Darin Bell, who created Candorville and Rudy Park }(the latter with Theron Heir), was awarded the Pulitzer “For beautiful and daring editorial cartoons that took on issues affecting disenfranchised communities, calling out lies, hypocrisy and fraud in the political turmoil surrounding the Trump administration.” Beautiful is an understatement. In an area of cartooning where art can be less important than pithy captions and the ability to meet intense deadlines, Bell’s work stands out as exceptional even before recognition dawns on the panel’s substance. When flipping through the work entered for consideration, his use of color leaps off the screen, even his simple panels reward intense scrutiny with amazing details that often offer poignant additions to the content. 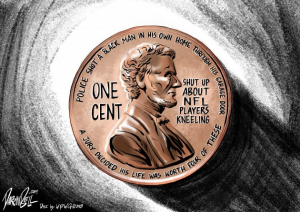 Other finalists for the prize in Editorial Cartooning included Rob Rogers, the ex-Pittsburgh-Post Gazette cartoonist who was fired in 2018 after 25 years with the paper . Many suspect he was fired for his cartoons critical of Trump. This is not Roger’s first time being close to the Pulitzer, having also been a finalist in 1999.

Last year’s winner in Editorial Cartooning was a digital comic, a historical first in the category. Read about Welcome to The New World, here or check out a full list of this year’s winners here. 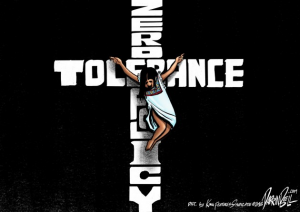 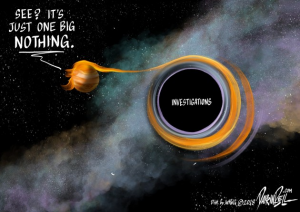