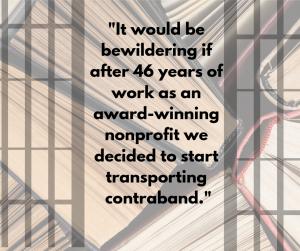 Without warning, Washington state’s Department of Corrections (WA DOC) enacted a policy banning direct book and comics donations from nonprofits to people incarcerated in the state. WA DOC claims this change is necessary to due to lack of resources available for checking materials sent in for contraband and inappropriate content. Books to Prisoners, one of the nonprofits aimed at getting reading materials to prisoners, is not going to accept this directive without a fight.

In Washington state, family members and friends have never been allowed to send books personally, instead relying on nonprofits and bookstores to deliver texts to inmates. Policies like that are common to remove the concern of smuggled contraband in books. According to Kelly Jensen, who writes for BookRiot,”The new policy limits books to those accepted by the Washington State Library for incarcerated individuals which had already been approved by the Prisons Division, used books from the Monroe City Library directed specifically to the correctional facilities in Snohomoish County, and to those used books purchased by prisoners enrolled in pre-approved correspondence educational courses from the bookstore linked to the educational facility in which they’re enrolled.”

This policy unreasonably reduces individuals access to books in prison. Prison libraries are woefully understaffed and underfunded, and the time prisoners are allowed to spend in the library is limited. Some of the most frequently requested books from nonprofits are dictionaries because the prisoner can utilize them more effectively in their cell than the library. Prisoners also often ask for books to help them learn or improve a second language, how to draw, and other manuals that provide them a constructive way to spend their excess of time.

Books to Prisoners took to Twitter to blast the WA DOC for treating Washington State Library (WSL) as a “scapegoat.” Later they explained in more detail to Book Riot, “It has been confirmed that [WSL] have no special staff or screening procedures, nor are they being given any extra staff or money to deal with any influx of books. The policy is using them as a pawn.”

Nonprofits all around the country assist underfunded institutions and economically insecure inmates by providing, not just free access to books and graphic novels, but also a safe, reliable, and affordable way to get books to inmates that also assures that materials are thoroughly checked for adherence to strict institution guidelines. These organizations rely on volunteers for the labor and offer families and inmates an alternative to having to buy books when they may not be able to afford it. Books to Prisoners told Book Riot,

This is not the first time a state has tried a ban like this. NY attempted a similar ban, and it was rescinded after public outcry. Then again in Pennsylvania, the PA DOC blamed book donation programs for security issues, namely a possible K2 (a synthetic cannabinoid) contamination that may have made guards sick (or may have been mass hysteria). Again the overly restrictive policies were rescinded because of public outcry.

Jensen put together a list of resources for people interested in reversing this decision, including contacting Prisons Division Correctional Manager Roy Gonzalez, signing Books to Prisoners petition, and donating to the nonprofit to help them fund this battle.

The censorship prisoners experience with these types of bans is destructive. Reading, whether for fun or self-improvement, is educational. Education is closely linked with reduced rates of recidivism. If people are supposed to believe that correctional institutions exist to rehabilitate individuals, then they need to stop trying to remove access to literature and of creating roadblocks to education under the guise of security.  Unfortunately, it’s becoming more apparent that these policies are punitive in nature, and their end game is not beneficial to the inmates or the rest of society.