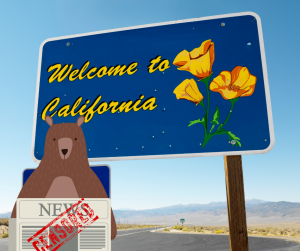 After almost three decades of helping students put together the high school newspaper, a CA teacher is facing possible termination for standing up for her students’ First Amendment rights. It all began in April, when Kathi Duffel received a letter from the school district superintendent saying that the administration had become aware that the Bruin Voice, a high school paper, was planning on publishing a story by an 18 year old student involved in the adult entertainment industry. Duffel, as the long standing faculty advisor was expected to present the story to the administration for prior review, according the threatening letter, or face disciplinary action, up to and including termination.

But Duffel didn’t accept this bold threat of censorship, which is the purpose of prior review policies. She stood up to the administration, contacted the Student Press Law Center (SPLC), a non profit dedicated to restoring First Amendment rights to students around the country. SPLC was able to recommend a lawyer in Northern California who would read the story to determine if any California laws had been broken, which is what the administration claimed was their sole reason for requesting prior review. The administration agreed to this compromise, but according to The San Francisco Chronicle,

“Duffel remains wary. The award-winning journalism adviser said she has been down this road at least three times with past administrators. She wins. They lose. And everyone gets bloody in the process — except the students, she said, who get their money’s worth in the civics education department…

‘You have to get your ducks aligned because you’re in for a knock-down, drag-out fight,’ she told The Chronicle. ‘They still have not learned their lesson — or the law.’”

CLBDF readers will be familiar with the two major Supreme Court rulings usually pulled out as precedent when discussing a free student press: Tinker, which held that students retained their First Amendment rights at school, except in specific circumstances, like destroying another’s right to privacy; and the far more restrictive Hazelwood decision which overrides the previous Tinkerdecision, which stripped students of many of their Constitutional free speech rights in favor of the rights of administrators. However, California has its own code (Education Code Section 48907), which renders Hazelwood largely irrelevant.

According to The Chronicle, Superintendent Nichols-Washer declined to be interviewed by the paper, so the letter to Duffel is all that can be used to assume the districts position. And while the superintendent did mention the importance of free speech, but also added “these rights are not limitless.” True, but they extend a lot farther than the Superintendent apparently grasps.

The district keeps repeating the claim that the article could contain, or does contain, content of an illegal nature, and an article around a student doing something illegal wouldn’t be protected under CA Education Code 48907. But according to the student journalist who wrote the article, the student interviewed in the article, and the award-winning teacher who advises the paper – the article does not contain illegal acts.

The Superintendent isn’t the only person trying to intimidate Duffel about this issue. According to The Chronicle, a local police office was waiting for Duffel outside of her class one morning when she arrived at work. His questions implied the award-winning journalism advisor was somehow involved in sex trafficking, and when she finally demanded to know what he wanted, he told her “I want a copy of that story.”

Duffel, understandably, said that interaction rattled her, but for the most part, this sort of fight doesn’t get to her, mostly because she’s been down this road so many times before. The Chronicle uncovered a history of censorship attempts, all failed. The paper’s first year, 1991, the administration wanted to block two ads – one of which was for Planned Parenthood – and the students threatened to sue if they had to, which was enough to stop the administration. In 2010, the principal threatened to start a prior review policy after the Bruin Voice, ran a couple articles that portrayed him accurately but not favorably. Duffel was forced to hire an attorney, the Voice escaped the threat of prior review. Three years later, the principal attempted to censor the paper by removing 1,700 copies of it so people wouldn’t see a story about inaccuracies the paper uncovered in the school safety handbook. Instead his actions ended up causing the whole thing to get picked up by national news outlets.

It is enough to almost make you feel sorry for the administration this time around. Almost.