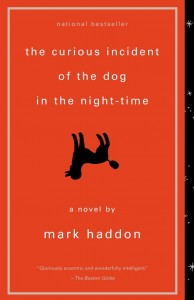 Westmont Hilltop School District, a small district just to the west of Johnstown, Pennsylvania, voted last week to keep The Curious Incident of The Dog in the Night-Time as a choice on its summer reading list. The district’s board of directors listened to comments from the largest crowd in recent history before voting 10 -2 to retain the book. According to The Tribune Democrat, Jeffrey Masterson, president of the school board, said that complaints typically were focused on one of three things: vulgar language, profane language (taking god’s name in vain), or unfavorable portrayal of person with autism.

The two dissenting board members both mentioned the profanity as a sticking point. Kamal Gella told the board that removing the book wouldn’t count as banning it, because people could elect to read it outside of school. Lisa Drennen, also a member of the board’s curriculum committee, said,

If we, as a board, vote to pass this book, then we are condoning the book as a good choice for our students. We, as a board, should not be labeling vulgarity and religious blasphemies as good. … If, in the (student) handbook, a student’s responsibility is to avoid indecent, obscene or inappropriate language … then why are we considering going directly against what we, as a school board, tell our students not to do?

One resident bemoaned the choice of Curious Incident, “Autism is a very serious thing, and getting insights into that, I think, is wonderful, but does it have to be this book? Aren’t there other books out there that can make the exact same points without having to add all this other garbage into it? … I just couldn’t get past using the Lord’s name in vain. Just couldn’t do it.”

And that did seem to be focus of many people’s comments and concerns with the best-selling mystery. Although the best comments of the night came from the priest of a local Catholic Church. Father Mark Begly spoke up about the community’s concerns over the book well as the repeated blasphemy and recommended people both against the book and in favor of it get involved in discussion groups that are part of the summer reading program. Begly told the crowd,

The issue here, in my mind, has nothing to do with censorship at all. It has to do with guidance. How are we guiding and teaching our children how to engage with the world in which we live? Obviously, I’m a Christian, and I take my God very seriously, but if I just simply ban everything that’s going to be said about my God or about my faith, then I’m living in my own little, narrow world.

This is an amazing example of how to handle complex materials and ideas that feel contrary to ones own personal philosophy. Certainly out of a room full of people complaining about profane language, the priest would seem to have the most authority with which to condemn it. But maybe it’s that seriousness with which he takes his religion, that allows him to to see that banning a book for containing sin is not the way forward for education or religion. And most importantly, whether its religion, sexual content, violence, or, like Romeo & Juliet, all three – books are not meant to live in a vacuum, especially for students. It’s exceptional that Westmont Hilltop already had student focused discussions groups in place for summer reading, but lets hope some of the concerned citizens take up Begley’s call and join in the reading and discussion. Not only would they be helping guide the next generation through literature, but certainly they’d learn something about the value of shared reading, and the joys of book clubs.

Great job Westmont Hilltop! CBLDF stands with you as you stand for the intellectual freedom of your students.