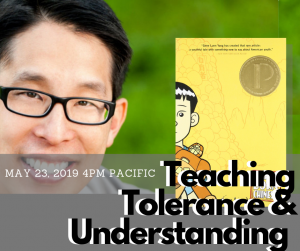 On May 23, 2019 at 4:00 pm PDT, educators and librarians are invited to join Gene Luen Yang, the National Book Award-nominated author of American Born Chinese, in a discussion of how comics help teach tolerance and understanding.  Yang will walk participants through such questions as:

Yang will draw from his career as a celebrated author, ambassador, and teacher to answer these questions and more during this webinar! Participants in this webinar will engage on these topics and examine Yang’s landmark work, American Born Chinese, taking away new lesson plans and classroom resources about identity, diversity, and intellectual freedom. Register today for your space at this free webinar!

Many interested in attending may not be familiar yet with Yang’s award winning memoir, American Born Chinese, or may have not read it in a few years. While familiarity with any particular comic is not required for enjoying the webinar (and getting a lot out of it)  those interested in a summary can utilize CBLDF’s Using Graphic Novels in Education: American Born Chinese, for either a cursory introduction or a quick refresher before getting to work with Yang in the upcoming Teaching Tolerance and Understanding webinar. 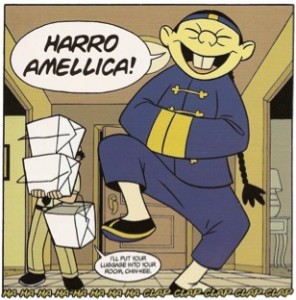 In an effort to show and tell the effects of racial stereotyping and assimilation, Yang presents one particularly egregious Chinese character, Chin-Kee, who has just arrived from China to visit his cousin Danny. Chin-Kee embraces all the negative Chinese stereotypes into one monstrous exaggerated whole. Chin-Kee’s eyes are pupil-less slits, he is drawn with a cartoon-like round face with two buck teeth. He wears traditional Chinese garments and speaks with the L/R switch (“Harro Amellica!”).

It is this rampant stereotyping that has caused objections. Ironically, it is these exaggerations that empower readers to feel the shame of racial stereotyping from all sides — those who embrace the stereotypes, those who abuse and make fun of them, and those who are stuck in the middle, uncomfortable with these actions and reactions, and often uncertain how to respond.

While this book has not been banned — to a large extent as a result of the tremendous support it has received from librarians and educators — it has often been deemed inappropriate because of its blatant stereotyping. American Born Chinese is a brilliant weaving of cultural mores, expectations and racial stereotypes all battling assimilation and inherent justice, with ones’ need to fit in. It is a testament for all readers who struggle with developing and maintaining individual identities while fitting in with their larger more diverse communities.

American Born Chinese is much like a poem for three voices. It tells three stories in three parts which come together at the end. 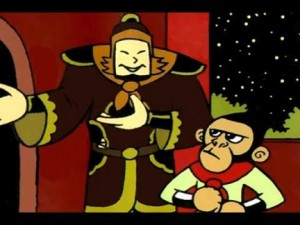 Story 1 – The Monkey King begins “One bright and starry night” and introduces the Monkey King, who has been the leader of Flower Fruit Mountain since he was “born of a rock.”  He hears a party in the heavens and as a deity in his own right rises through the heavens to join them, only to be laughed at because while he “may be a king…even a deity [he is] still a monkey.” The Monkey King returns to his home and lays awake, thinking of how he can change his fate.

The Monkey King, angry at his rejection decrees that all his subjects wear shoes (they have an awful time of it in the trees), and he retreats to master various disciplines of Kung Fu. After years of practice and fervent study, he emerges transformed, larger than life, with a mission to show the other gods that he is now “a great sage equal of heaven.” He bullies and beats the other gods, who cry to Tze-Yo-Tzuh (He Who Is) for help. Tze-Yo-Tzuh asks him why he is such an angry monkey. The Monkey responds in anger that he is not a Monkey but a god. Part II ends with the Monkey King being trapped by Txe-Yo-Tzuh under a mountain of rocks for 500 years. The last part of his story is a tale of a hero’s trial / quest, acceptance, and redemption. 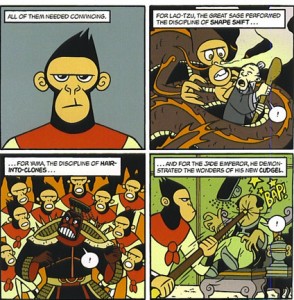 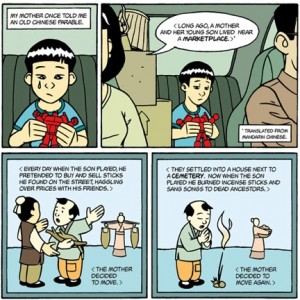 Story 2 – Jin Wang’s Story begins with, “My mother once told me an old Chinese parable…” and shows Jin Wang in the backseat of his family’s car looking sad while playing with a transformer, and retelling the parable. They are moving (again) and he is upset. He later tells his mother’s new herbalist that one day he wants to be a transformer, and she responds, “It’s easy to become anything you wish…so long as you’re willing to forfeit your soul.”

When Jin Wang gets to his new school, his teacher makes false assumptions about his personal information when introducing him. 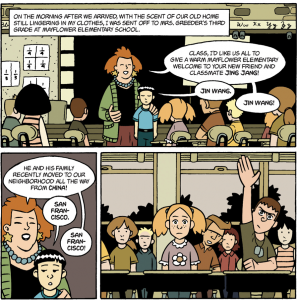 She introduces him as “Jin Jang” and tells the class he’s from China. He meekly and embarrassingly corrects her: his name is Jin Wang, and he’s from San Francisco. At school Jin is always alone. His classmates make fun of his food and Chinese heritage, and the only kid who befriends him is the school bully who merely taunts him. A few years later another boy, Wei-Chen Sun, who has just come from Taiwan, is introduced to the class with a different teacher making similar false assumptions and mistakes (he is introduced as Chie-Chen Chun, from China). Unlike Jin Wang, Wei-Chen has a thick accent and even though Jin is sitting alone with no friends, he wants nothing to do with Wei-Chen…until he sees him playing with a transformer.

Jin-Wang’s story continues with him in junior high-school. He has a crush on a girl in his class, Amelia, and is shy. His friend, Wei-Chen calls him a “turtle.” Eventually, Jin decides that the only way he’ll be able to successfully woo Amelia is if (like the Monkey King) he changes his appearance — to look more like the others. He “transforms,” and the rest of his story depicts the strains he puts on his friendship with Wei-Chen as he courts Amelia along with the challenges of young love. 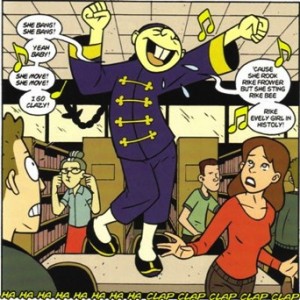 Story 3 – Danny and Chin-Kee’s Story, Part 1 opens with an image of Chin-Kee’s face — a cartoon-like caricature of a Chinese face with slits for eyes, two buck teeth, braided hair, and cap, with the title splashed across the page: “Everyone Ruvs Chin-Kee.” The story then unfolds in the pages to follow. Danny, about to ask his lab partner, Melanie, for a date finds out Chin-Kee is arriving for his annual visit. Danny is horrified. Chin-Kee arrives, sees Melanie and wants to bind her feet and to meet another girl like her in Danny’s school for a bride of his own.

Danny and Chin-Kee’s story continues with Danny taking Chin-Kee to school. Danny is constantly embarrassed by Chin-Kee, who sometimes gives valid reason for this response and sometimes does not. As Danny tries to integrate into his new school and blend in, Chin-Kee is constantly making sure everyone is aware of his presence. He sings loudly in the library (in his thick Chinese accent), he plays a prank on a “jock” Danny is trying to impress, and in each class Chin-Kee immediately shouts out the correct answers before anyone else can respond.

Towards the end, however, Danny and Chin-Kee’s story merges with Jin Wang’s and the Monkey King’s. We find out how they are all related, and are left to contemplate life’s choices, cultural and self-identities, assimilation, acceptance, and friendship.

In short this is a story a of heroes, large and small, who must learn how to best fulfill their destinies while maintaining their identities and self-worth in communities that don’t always appreciate their strength and value.

To read more about working with this comic in the classroom, check out the full post in Using Graphic Novels in Education, or join CBLDF for our free webinar May 23rd, 2019, register today!