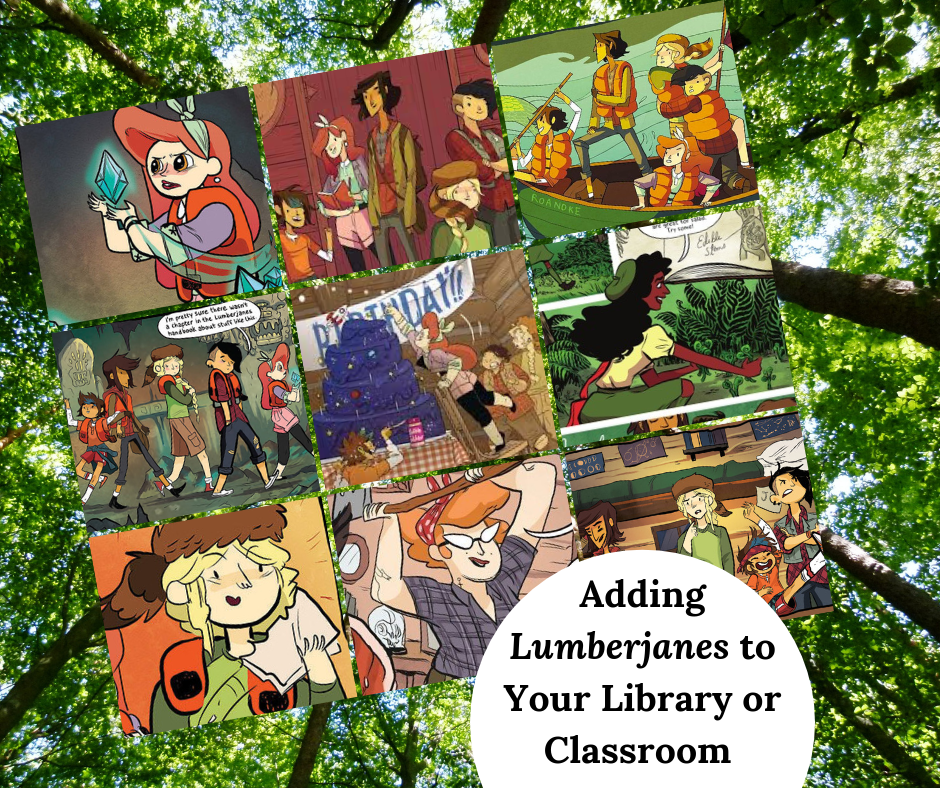 This article offers resources for adding the first volume of Lumberjanes to a classroom, curriculum, or library. It also outlines information important in case the work is challenged. The series is an award-winning series that features great LGBTQ+ characters and a vast selection of positive fem… Hardcore Lady Type characters.

Surprisingly, Lumberjanes is not loudly challenged or banned, perhaps through of its intense popularity, real all-ages appeal, and realistic and thoughtful depiction of LGBTQ+ characters, all of which has contributed to makine this series a hit. Still with LGBTQ+ characters, it may be that often teachers or librarians don’t bother stocking it in schools, to avoid the potential fight in they know they’re in an area where parents might complain. These resources from CBLDF are meant to give confidence for adding titles into collections without worry that challenges would derail the whole graphic novel section.

What’s to Love: Lumberjanes is the hit series from the BOOM! Box imprint that features five rad ladies who fight monster baddies with the power of friendship! Written by Noelle Stevenson (Nimona, Adventure Time) and newcomer Grace Ellis, and illustrated by Brooke Allen (A Home for Mr. Easter), this new series has taken comics by storm and has earned rave reviews. What It Is: At Miss Qiunzella Thiskwin Penniquiqul Thistle Crumpet’s Camp for Hardcore Lady Types, things are not what they seem. Three-eyed foxes. Secret caves. Anagrams! Luckily, Jo, April, Mal, Molly, and Ripley are five rad, butt-kicking best pals determined to have an awesome summer together…and they’re not gonna let a magical quest or an array of supernatural critters get in their way! The mystery keeps getting bigger, and it all begins here.

BOOM! even offers a downloadable free preview of the first issue, if people want to try it for themselves or maybe share it with a young adult in their life.

In a great interview with Noelle Stevenson and co-creator and writer, Shannon Watters, spoke with Comics Alliance shortly after the series came out and was quickly discoverd to be a huge hit. Noelle Stevenson talked a lot about the stuggles and triumphs in writing a series about young women by women, specifically avoiding pitfalls she hated in other media growing up, like “grrl power” and the “token girl” role.

I didn’t like the stories where it was people telling girls that they couldn’t do things and girls did it anyway. I didn’t want people to be like, “No – you’re a girl.” I didn’t want people to make a big deal out of them being a girl. I just wanted them to have fun. So it was very important with Lumberjanes — we didn’t see any male characters until book four. I just didn’t even want that to be an influence on them, I just wanted them to be on their own and we tried to avoid a lot of the whole, “Girls rule, boys drool,” whatever. I’m not interested in that, it’s very boring to me. Boy characters are just more characters for them to interact with.

There really is so much to love about this first volume of Lumberjanes. The girls have great exclamations from “What the Junk!” to calling out well known women such as Joan Jett and Juliette Gordon Low. They are smart, capable, and really just a pleasure to read. I would not object to more stories and characters like this. This title needs to be in every graphic novel and/or tween/teen collection.
— Review: ‘Lumberjanes,’ vol. 1″ May 14, 2015 by Lori Henderson

The first four supernatural adventures of five young scouts-in-training at Miss Qiunzella Thiskwin Penniquiqul Thistle Crumpet’s Camp for Girls Hardcore Lady Types are gathered in this clever, funny, and just-creepy-enough collection. After a skulk of three-eyed foxes deliver the ominous message, “Beware the kitten holy,” friends Jo, Mal, Molly, April, and Ripley are drawn into a world of paranormal goings-on that involves a mysterious lighthouse, a trap-laden underground cave, and a nearby camp for boys. With a cast of varied skills and temperaments, there’s something here for everyone. Wild child Ripley doesn’t hesitate to leap after the eagle that snatches her candy bar. April, who has the doe eyes and buoyant tresses of a Disney princess, doesn’t just arm-wrestle a giant talking statue, she snaps off his arm in the process. Natural leader Jo is a math whiz, and the mutual attraction between nervous punk-rocker Mal and sweet-natured Molly is evident. Humorously riffing on everything from scout badges to the X-Men to feminist heroes (“Where the Phillis Wheatley were you?”), it’s a sharp, smart, and most of all fun celebration of sisterhood that will leave readers eager for the Lumberjanes’ future exploits. Ages 10–up.

Featuring a girl-on-girl crush and a trans girl — both respectfully depicted — this comic is wonderfully progressive. It has strong female role models, and powerful messages, which makes it stand shoulders above not just most kid-friendly comics, but nearly every comic out there!
— T0 Be Brave and Strong: Should Your Kids Be Reading ‘LUMBERJANES?’  by Tara Marie

What Should I Do if Lumberjanes is Challenged?

What do you do when a comic is challenged? Much of the material in this post can be used to help defend Fun Home against a challenge. The American Library Association has developed these helpful tools to cope with challenges: