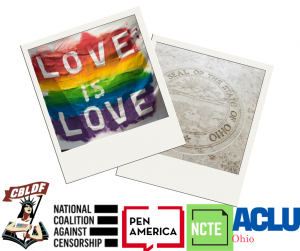 In response to recent attacks and efforts to suppress Pride events in Ohio libraries, Comic Book Legal Defense Fund, National Coalition Against Censorship, PEN America, National Council for Teachers of English, and ACLU of Ohio have issued a statement condemning House Speaker Larry Householder’s letter pressuring the Ohio Library Council to cancel events.  The statement calls out Householder’s “assault on free speech principles” and cites his letter as “an abuse of political power.”

From the Statement on Ohio House Speaker’s Attempts to Suppress Pride Events:

While he claims to be a ‘believer in the First Amendment’ and recognizes libraries as “incubator(s) for thought and ideas…for debate and discussion,” Speaker Householder’s implicit threat to penalize libraries financially in retaliation for LGBTQ expression is a clear attempt to silence voices he personally disagrees with. To Speaker Householder, this may not appear to be a First Amendment issue but defunding expression because of its viewpoint is a highly effective means of suppressing opinion. The government can choose whether to fund culture and libraries, but it cannot then use the purse strings to suppress disfavored viewpoints. Indeed, U.S. courts have firmly opposed governmental efforts to suppress expression by selectively denying funding. Brooklyn Institute of Arts v. City of New York, 64 F. Supp. 2d 184 (E.D.N.Y. 1999)

On May 31, Householder tweeted a picture of the letter with the caption, “I sent this letter to the Ohio Library Council today. Our public libraries are great resources for young & old alike. But they should not be a resource for teenage boys to learn how to dress in drag. I demand it stop now !!!” The letter basically says that the threats to remove funding from the Ohio libraries aren’t related to the First Amendment, but rather “common sense.” He claims that “taxpayers aren’t interested in seeing their hard-earned dollars being used to teach teenage boys how to become drag queens.” And that “this isn’t about banning books or banning thought or any other red herring argument. This is about right and wrong.”

One of the events referred to by both Householder’s letter and the statement condemning attempts to suppress Pride events, was Drag 101.  Hosted by Selena T. West, a local Ohio drag queen and former Miss Gay Ohio America, the event was scheduled in an Ohio library aimed at celebrating and demystifying the art of Drag. The event was canceled in part because of thinly veiled threats of violence the library received. Luckily, a local comics shop, Secret Identity Comics, hosted the event in the library’s stead, a proud demonstration of the inclusivity of many neighborhood comics shops.

Read the full statement about Speaker Householder’s letter below: