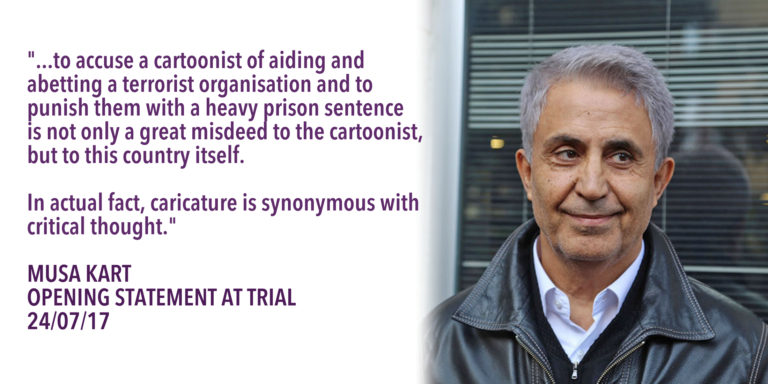 Cartooning is not a crime, #FreeMusa

This week marked the three-months since award-winning editorial cartoonist Musa Kart voluntarily turned himself into jail following miscarriages of justice, trumped-up charges, and a decade long harassment campaign from Turkish President Erdoğan. Kart and his fellow journalists from the Turkish paper Cumhuriyet were charged with supporting terrorism because Erdoğan didn’t like their critical coverage of the government. Cartoonists Rights Network International, Cartooning For Peace and Cartooning For Peace Swiss Foundation commemorated the anniversary with a joint statement, to remind the public that Kart remains in jail alongside his colleagues from the Turkish paper, and the only crime they have committed is running afoul of a tinpot dictator like Erdoğan.

On this sad anniversary, the association and the foundation Cartooning for Peace (CFP) and Cartoonist Rights Network International (CRNI) would like to reaffirm their unwavering support for Musa Kart, his family and his imprisoned colleagues. They take this opportunity to reiterate their call for the immediate release of Musa Kart and his five courageous colleagues and the rejection of all charges against the former Cumhuriyet staff wrongly accused.