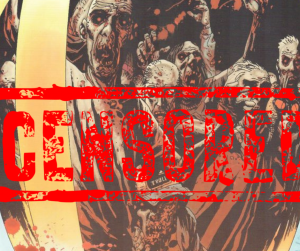 Last week, CBLDF reported on the removal of the best-selling Walking Dead comics series from an Idaho school. The removal was not the entirety of the removal, as the administration asked students not to bring copies of the work into school to read on their free time, and are contemplating a two-tiered library card system to avoid potential circumventing of the ban with InterLibrary Loan. Comic Book Legal Defense Fund, in the capacity as co-sponsor of the Kids’ Right to Read Project (KRRP), with National Coalition Against Censorship (NCAC), sent a letter to the Idaho school district urging them to honor their “First Amendment obligations by rescinding this ban and restoring The Walking Dead to WHS library shelves.”

The graphic novel series casts a diverse ensemble of characters within a horror setting to examine serious topics including trauma, grief, loss, and the capacity for people to rebuild personal, social, and societal bonds when their status quo has been ripped away. The series explores the nature of civilization by casting its characters into a survivalist environment where readers are invited to consider how they would live without the conveniences and security of the modern world. As it progresses, the series also explores the role of law in society, with several storylines that explore authoritarian, democratic, anarchic, and militarized forms of government.

Over its run of more than 30 volumes, The Walking Dead explores many of the emotional, social, and intellectual issues teens grapple with every day, while also providing vital ways of thinking about topics examined in the course of their education.

According to a local news report, the inciting incident occurred at the end of the school year, when a former teacher saw a student reading a copy of The Walking Dead (TWD). When the teacher investigated further and found a selection of the graphic novels in the school library, they went to Wallace Junior/Senior High School (WHS) Principal Chris Lund, who, commendably, consulted the school district’s own policies for challenged materials to determine the next steps in the situation.

Principal Lund then put together a well-rounded committee with students, educators, and parents to read the graphic novels and make a recommendation to the school board as to what should happen to the titles. This is a common aspect of many school district’s policies, with a diverse committee providing an approximation of the larger community, and therefore offering a hopefully unbiased recommendation for the challenged work. The committee voted 7 – 4 to keep The Walking Dead in the library.

However, according to local news, there was parental pushback to the vote, despite the fact that parents were represented on the committee. So Superintendent Dr. Bob Ranells, ignored the committee’s recommendation, removed the comics from the school library, and donated them to the local public library.

Your decision to disregard the review committee’s recommendation and ban The Walking Dead based on your subjective assessment of isolated passages undermines the committee’s work. It also infringes on students’ First Amendment freedoms and will only invite challenges from others seeking accommodation for different views and beliefs.

Because Wallace Junior/Senior High School participates in InterLibrary Loan, theoretically students could just take the comics out of another library and have access to them. So the Superintendent also mentioned the possibility of limiting student’s access to library books based on a new system involving two different levels of library cards. One card would only allow students to borrow books from WHS, while the other would provide the previously guaranteed right to access available materials through InterLibrary Loan. How the cards would be distributed, and whose rights would be restricted was not offered, but likely it would fall to the parent’s permission to determine the larger access to reading and research materials they would want their child exposed to.

Kids’ Right to Read Project is a joint effort headed by NCAC and co-sponsored by Comic Book Legal Defense Fund and American Booksellers for Free Expression. Also signed onto the letter and frequent supporters of KRRP are National Council of Teachers of English’s Intellectual Freedom Center, The Author’s Guild, and PEN Children’s and Young Adult Books Committee.

Read the full letter below.