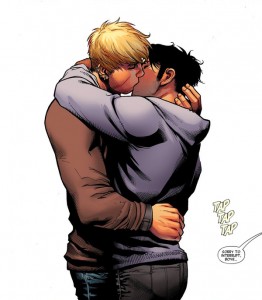 Last week law enforcement officials raided a book festival in Brazil at the mayor’s order, to seize copies of an Avengers comic featuring Hulkling and Wiccan, two male superheroes, kissing. The raid turned up no copies of the book, Avengers: The Children’s Crusade, as the booth carrying it had sold out days prior to the mayor’s crackdown on LGBTQ+ comics, but it did serve to draw attention to Queer comics in Brazil, as well as many people’s displeasure with how the mayor is spending his time and efforts.

According to The New York Times, Rio de Janeiro mayor, Marcelo Crivella, took to Twitter to voice his concerns claiming that the material was “unsuitable for minors” and that he was trying to “protect families.” The Times quotes Crivella as saying, “Books like this need to be packaged in black plastic and sealed.” The International Book Festival’s organizers did not give into Crivella’s wishes or cower from his political power, instead, they took him to court on Friday to get an injunction against any attempts to ban the comic, and the judge granted it, citing the constitutional right of free expression. Article Five in the Brazilian Constitution protects the right to free speech for the Brazilian people, excluding Hate Speech, Bullying, and Moral Harassment (to continually denigrate a person would fall under moral harassment).

According to The Times, the blowback from the raid only continued from there.

The comedian Felipe Neto, one of Brazil’s most popular YouTube stars, said he would distribute thousands of books with gay and lesbian characters at the festival. The books, he said, would come with a red label saying they were “inappropriate for backward, retrograde and prejudiced people.”

Then, on Saturday, the publishing house Faro set up a stand at the festival under the banner “Books That Are Forbidden by Crivella” and featuring a host of volumes on issues involving gay and lesbian people. The stand became a selfie magnet, the newspaper O Globo said.

Mr. Crivella’s order also served to remind local newspapers and TV stations of other things the mayor could be doing, like fighting poverty. The local unemployment rate hit 15.3 percent in the first trimester of this year.

“Crivella, This Is What’s ‘Inappropriate,’” read the headline in the newspaper Extra, atop a photo of a homeless woman and her children sitting on cardboard on a sidewalk.

The mayor, who is also an evangelical preacher, was unbowed. In a video posted on Friday, Mr. Crivella said he was trying to protect families.

Crivella has previously claimed people in same-sex relationships were “victims of a terrible evil,” despite a progressiveness to country’s majority. Brazil legalized same-sex marriage in 2013 by a 14-1 vote from the National Justice Council just two years after they unanimously approved same-sex couples receiving identical rights as straight couples. Brazil has a thriving LGBTQ+ community, filled with diverse families, some of whom resemble Wiccan and Hulkling’s own relationship.

← Last Week! Red Sonja and Dynamite Support the Fight for Free Expression!
Ask Your Local Comics Shop for This is What Democracy Looks Like Today! →